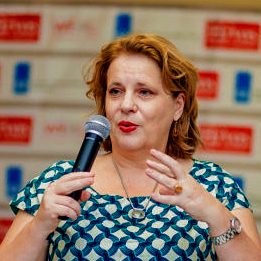 Tanja Lubbers has 25 years of experience in international cooperation and communication for change and social innovation. She started her career as a foreign affairs editor at VPRO, one of the public broadcasters in the Netherlands. Her work took her to the Balkans, where she produced a television series for VPRO. Then she decided to move into the international cooperation sector as a country representative for Pax Christi in Macedonia. On her return to the Netherlands, she was Head of Campaigns at Oxfam Novib for five years.

Tanja became the regional director of Hivos in Southern Africa at our Zimbabwe office in 2013. In October 2020 she assumed the leadership of the Hivos Hub in Latin America.