Why a pride parade is so important

LGBTI people don’t have it easy no matter where they live: sexual minorities in most places are faced with negative attitudes, stigma and violence. In the relatively young country of East Timor, independent from neighboring Indonesia since 2002, a public pride parade was held in July 2018 for just the second time because of the fierce battle for acceptance the LGBTI community has to fight.

Natalino is twenty-eight, gay and lives in East Timor. During the first pride parade in 2017, which he had organized with his LGBTI youth organization Hatutan, he suddenly ran into his conservative, religious brother. Although Natalino had invited him to the parade, he didn’t expect him to come because they hadn’t been on speaking terms for some time.

"But then I suddenly saw him in the distance, late as usual. As we approached each other, I saw he was wearing a t-shirt that said 'You are not alone'. We embraced each other with tears in our eyes. It was one of the most emotional moments of my life, especially because of the difficulties we had experienced."

Before this embrace, Natalino's brother, like his parents, had spent years feeling torn between accepting Natalino’s homosexuality and rejecting it. Their small moment together is a sign of the change that is happening in East Timor.

The East Timor pride in pictures

Photo's were taken by Clementino Amaral and Bernardino Soares.

(Continue reading the article below) 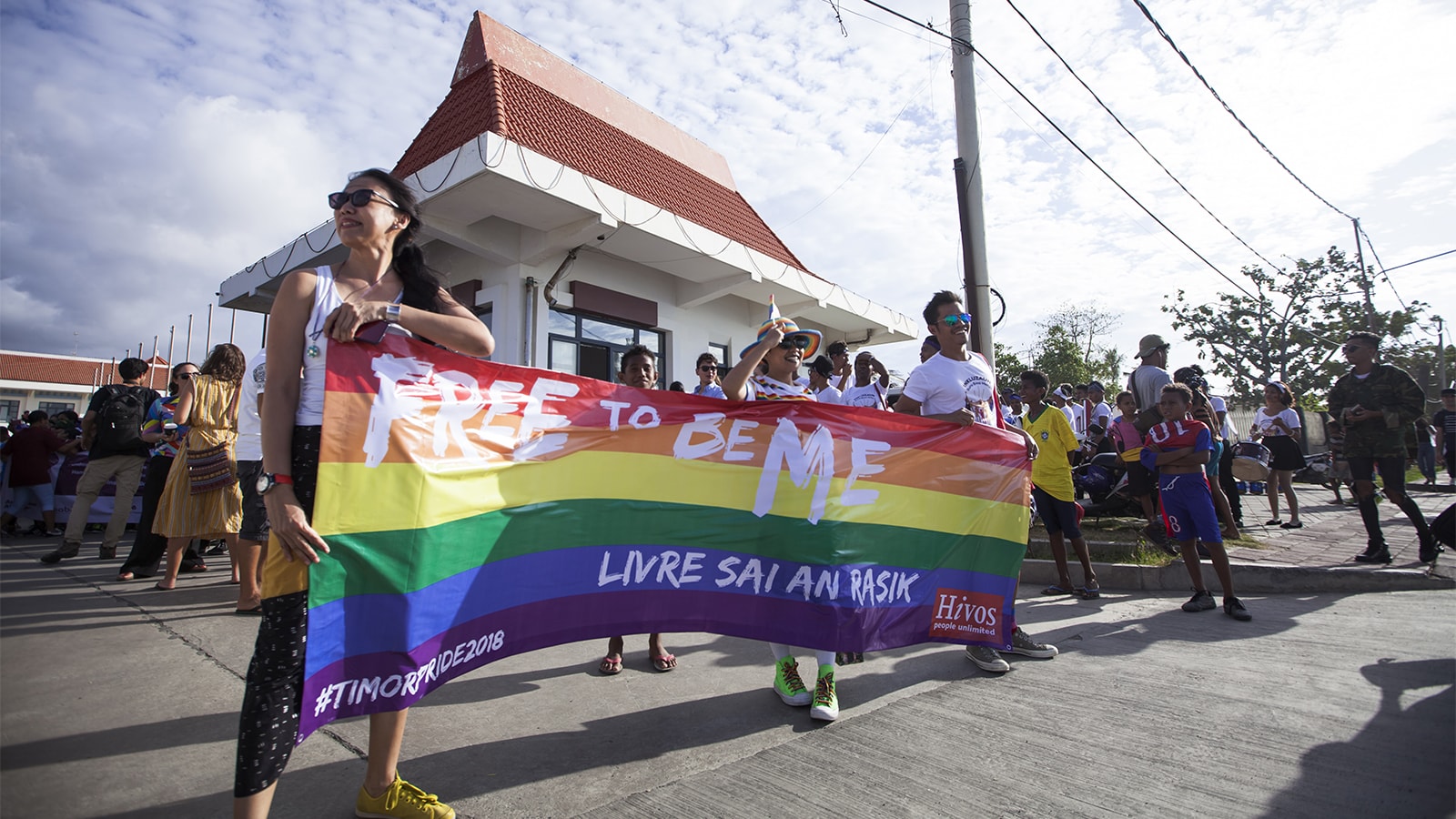 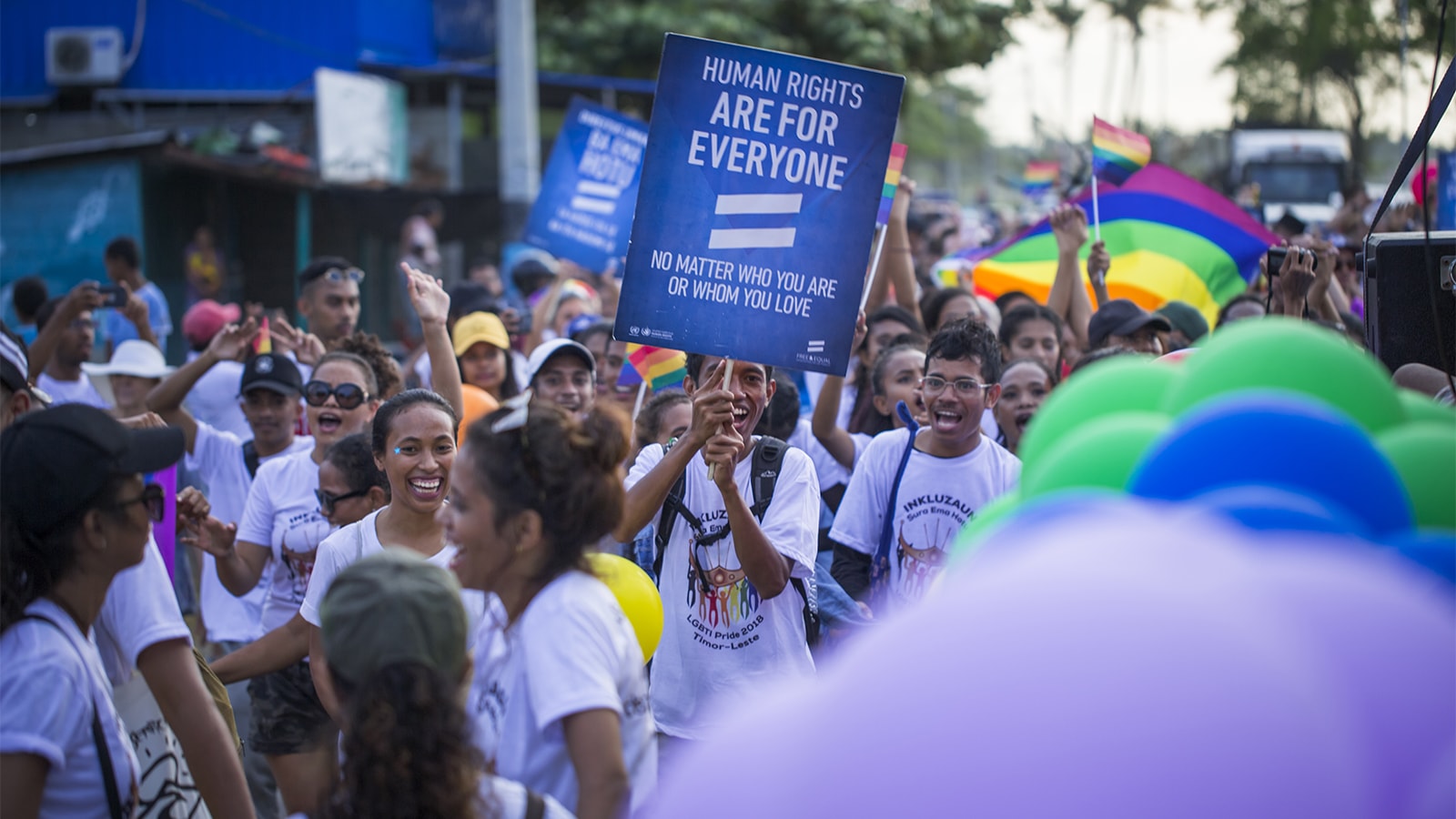 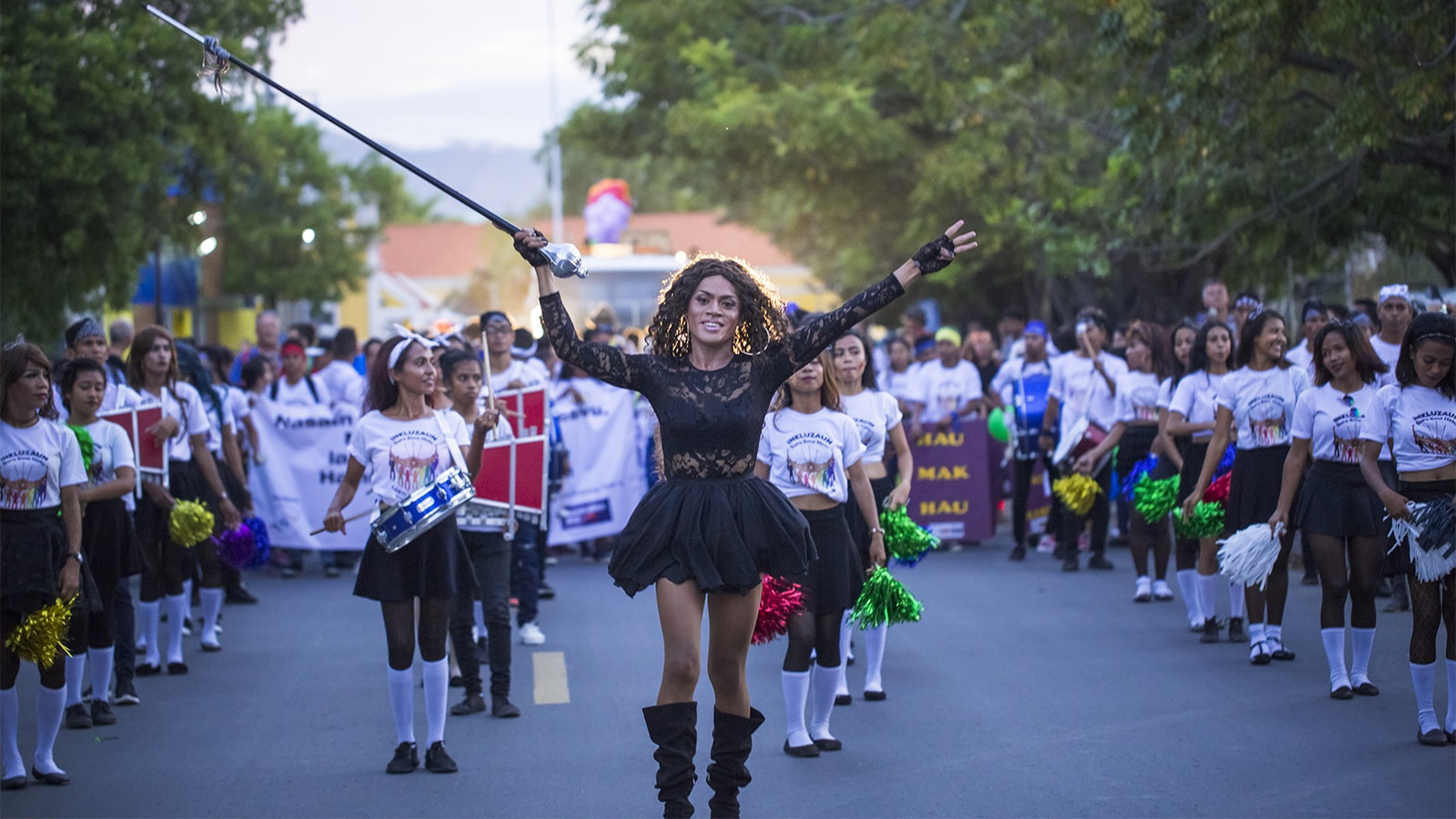 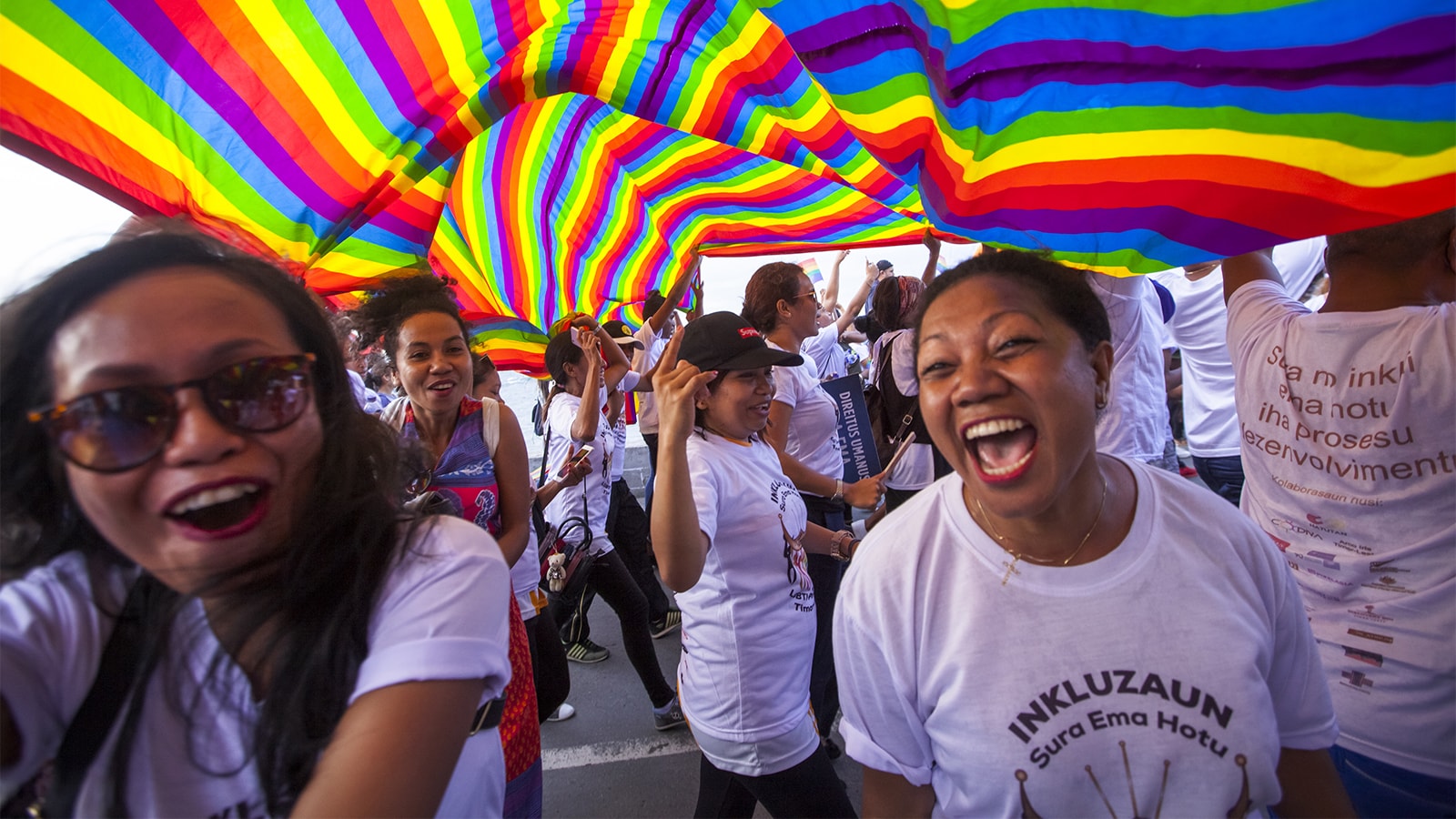 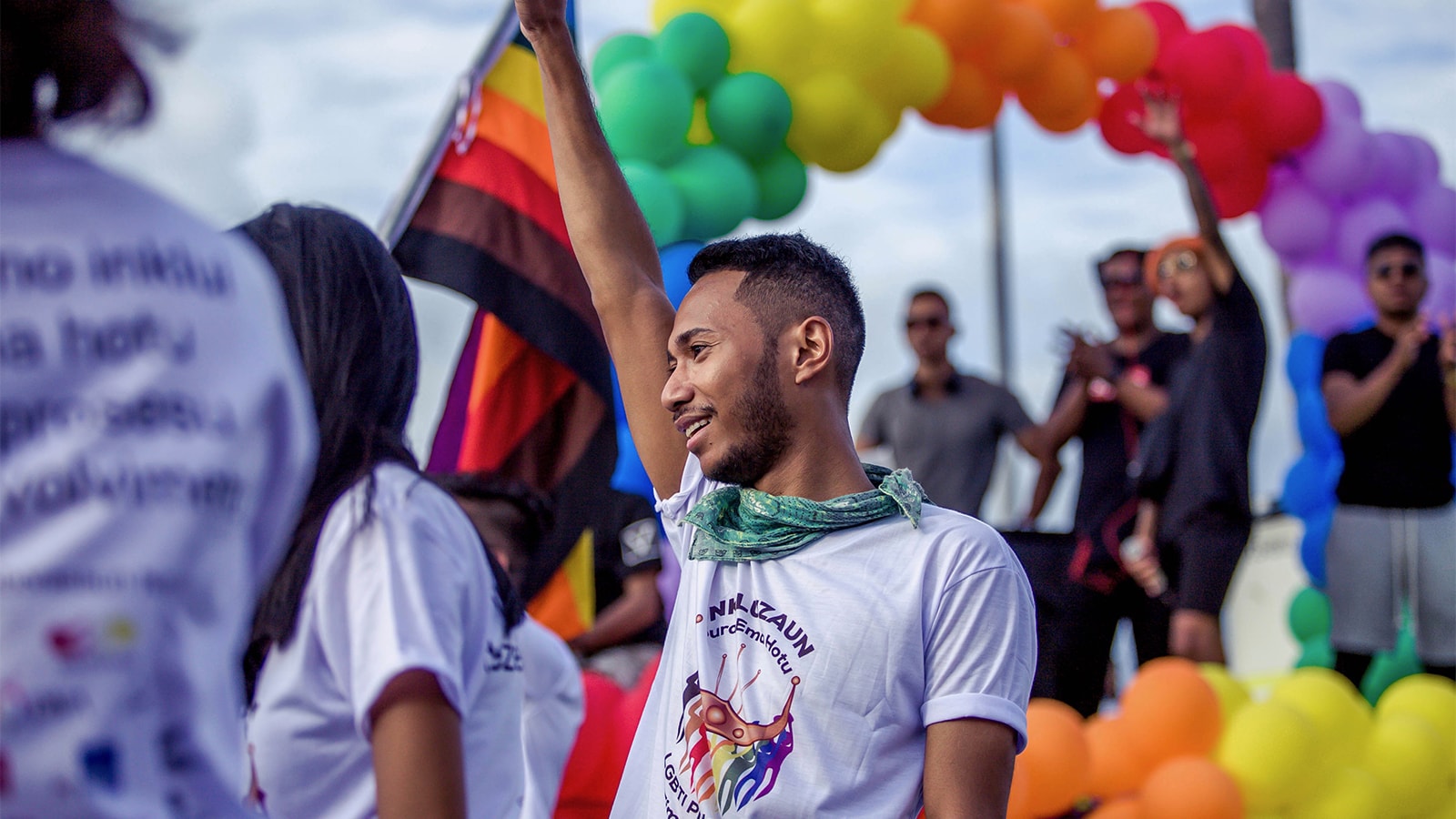 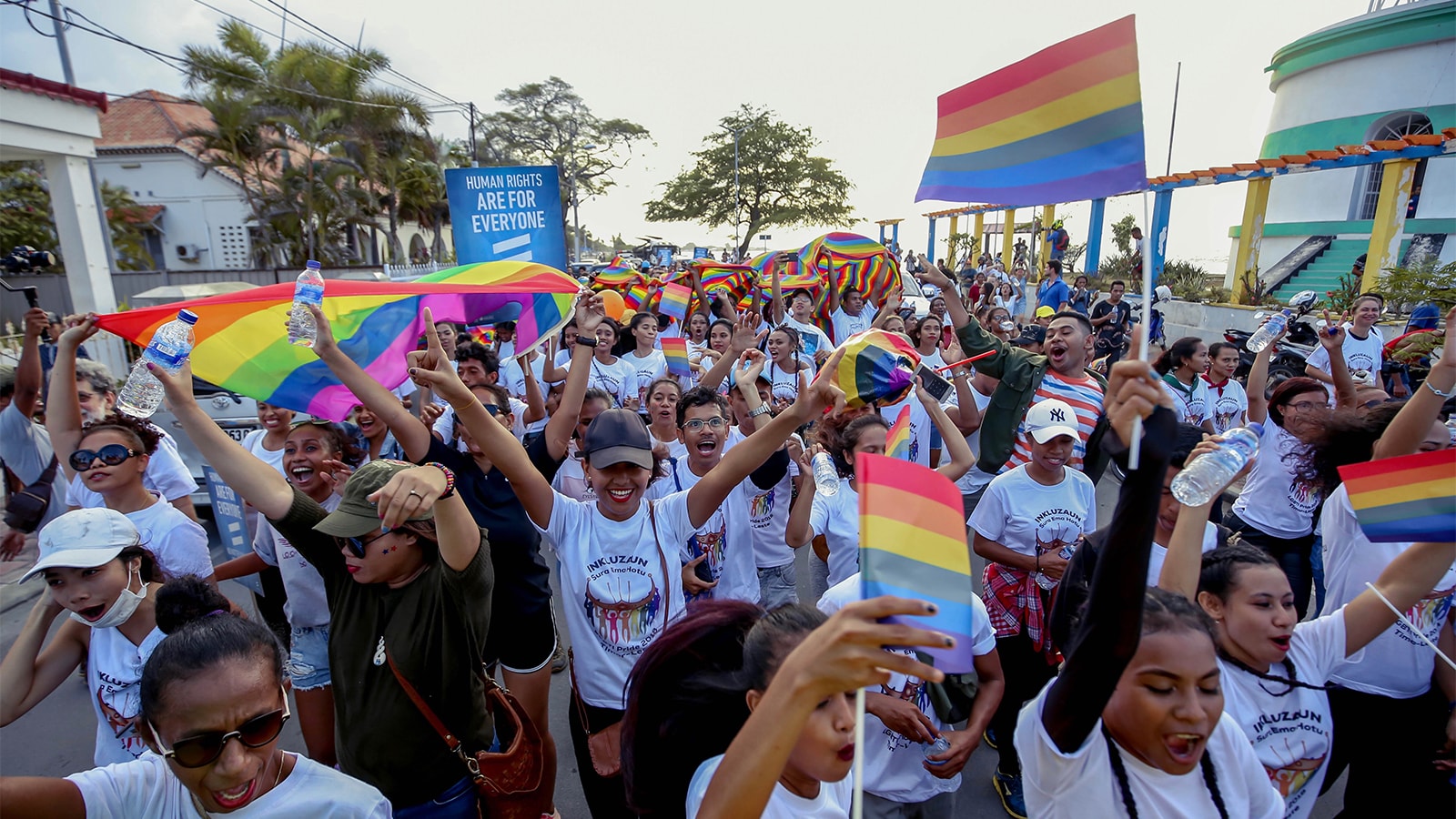 The Coalition for Diversity and Action (CODIVA), the first LGBTI organization in East Timor, is playing an important role in this change. With Hivos’ support, it has expanded from offering HIV-related services for gay men and transgenders to fighting for greater inclusion of all LGBTI people in the country. Through Hivos, the founders of CODIVA (themselves members of the LGBTI community) were able to apply for funding and start their organization.

We have to continue educating people here to understand issues such as gender and sexuality.

Hivos’ regional Sexual Rights and Diversity program manager, Jonta Eliakim Saragih, says CODIVA’s expansion is essential. To illustrate this, he recalls a recent incident when a transwoman was bullied and mistreated. Jonta's friends took her to what they thought would be a safe place – a women’s shelter for victims of domestic violence. But they turned her away, not because she wasn’t a battered wife, but because they claimed she wasn’t ‘a real woman’. That’s when Jonta realized, “We have to continue educating people here to understand issues such as gender and sexuality."

This is why Hivos supports CODIVA, says Jonta. “Because Hivos fights to uphold all human rights, we believe that CODIVA will remain crucial for the LGBTI community here for some time to come." But CODIVA is still too small to operate independently, and Hivos is currently its only financier.

From small to large, from opponents to advocates

Thanks to the efforts of CODIVA and activists like Natalino, the country is starting to change. In 2017, Natalino had a video made about LGBTI acceptance in families. The Prime Minister agreed to appear in the video, and Xanana Gusmão, one of the founders of the country, attended its screening. Both figures are held in high esteem; people in East Timor listen to them. Natalino concludes, "This gave us so much confidence, we decided to try and organize a pride parade through the streets."

About 500 people came to their first attempt in 2017, and thanks to the networks established then, 2018 was three times as large. Embassies and organizations contacted Natalino and his Hatutan colleagues to offer support, and in July 2018, with support from CODIVA and Hivos, they succeeded in getting more than 1500 people to participate.

There were even Catholic nuns! That was actually not allowed by the church. The fact they came anyway was a great gesture for us.

On social media, those who had criticized the first parade were now talking about “respecting one another”. 2018’s participants were also more diverse, with more representatives from the government. Natalino says, “There were even Catholic nuns! That was actually not allowed by the church. The fact they came anyway was a great gesture for us."

Natalino thinks this new visibility is vital in creating social change because it helps normalize the discussion about acceptance. "Just two years ago, we didn't dare organize a public parade," he notes. But now, pride parades provide and ideal platform for the LGBTI community to be publicly visible as themselves.

What motivated him to take the risk of producing videos and organizing parades in support of LGBTI rights and inclusion? A few years ago, a news story about a transwoman and a boy celebrating a birthday had been distorted into one of the couple getting married. It flared into a national debate, even reaching the parliament, where MPs asked if this would bring disgrace to East Timor. “The same year, a study came out showing that corrective rape and physical and sexual abuse of lesbian women was still very common here. Then I felt we must do something. It was getting too difficult to be ourselves here."

A local and a regional struggle

That is why the work of CODIVA is still very much needed in East Timor. The organization is crucial in drawing people's attention to this issue and keeping it in the spotlight.

In the conservative neighboring country of Indonesia, where anti-gay discrimination is used by politicians to win votes, this type of visibility would not be possible. According to Natalino, this is partly because other countries in the region - Taiwan and Australia, in particular - have legalized gay marriage. This worries conservative groups in Indonesia, who publicly criticize homosexuality in ever harsher terms. The support and key role of Hivos for the work of CODIVA is necessary in the region as well.

As LGBTIs, Natalino and Jonta’s struggle is also personal. They feel deeply involved and are fully aware that their community’s major support network is still only CODIVA. Jonta makes it very clear: "That's why I continue to fight as part of Hivos to keep improving the living conditions of my community, here and everywhere."

Hivos strives for a world where everyone has the right to be who they really are. Let’s celebrate diversity,