Imagine a world where the people hit hardest by climate crisis have a say in how to stop it. Imagine that youth, Indigenous Peoples, women, and others most affected by global warming have the resources to implement their own climate solutions. Solutions that are highly effective because they meet local needs, suit the local context, and create sustainable economic opportunities for local people. This world would be one where people have a much better chance of surviving, and even thriving, despite the massive upheavals of the climate crisis.

At the global level, to achieve the key commitments made in Paris, climate investment should count in trillions rather than billions. The 100 billion per year climate financing target from 2020 onwards has already been missed. Industrialized countries have overwhelmingly failed to provide anything close to the scale of climate financing needed – let alone the specific demand for a loss and damage financing facility.

And at the local level, although ever more governments and stakeholders understand the importance of shifting resources, leadership and agency to the local level, the world pictured above is still far from reach

To illustrate this, in 2017–18 only 20.5 percent of bilateral climate finance went to Least Developed Countries (LDCs) and 3 percent to Small Island States (SIDS). It was often in the form of loans and other non-grant instruments, which risks plunging these already vulnerable countries further into debt. Even in the current meagre climate finance, according to some estimates, less than 10 percent actually flows to the local level.

There are many reasons why climate finance doesn’t end up at the local level.

Some are related to complex rules and requirements in accessing international funding, which local actors often lack the knowledge, network, skills and/or scale to comply with.

Decision-making power is still held at the national and international level, often failing to (financially) enable local actors to lead climate action. Even at national level, those most affected by climate change often have the least say in setting priorities for climate policy and funding.

What needs to happen

Recently, Hivos – as part of the Voices for Just Climate Action alliance – studied a handful of promising alternative finance delivery mechanisms. While some have performed better than others, they share the potential for downward accountability and effective participation of different voices as an integral part of the funding mechanism. Based on the study, we put forth the following recommendations which governments, international intermediaries, and global banks and funds should give serious consideration to at the upcoming COP27. 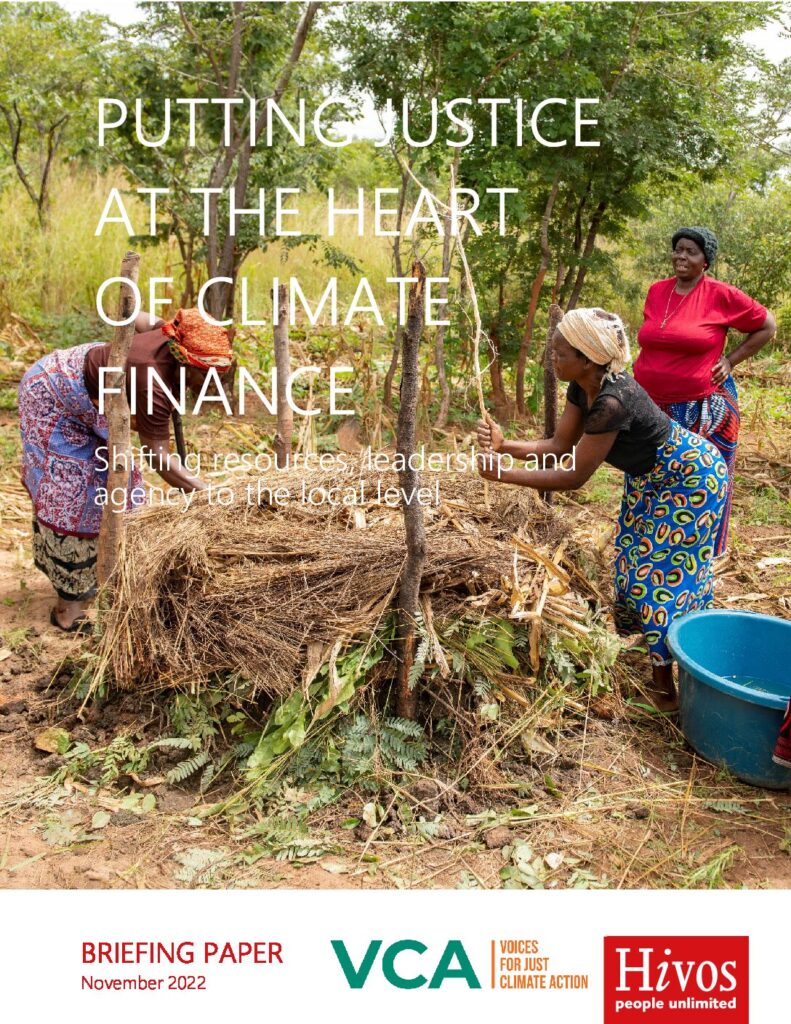 Putting justice at the heart of climate finance

Firstly, create mechanisms for participatory funding and oversight structures to ensure that local actors drive decision making. This includes addressing structural inequalities faced by women, youth, children, Indigenous people, and other marginalized groups, and fully integrating these groups in the design and implementation of adaptation and mitigation actions.

Secondly, routinely set concrete targets for funds that need to reach climate solutions driven by local actors. Provide grants instead of loans, and use long-term, patient and flexible programmatic funding instead of short-term, ad hoc project funding. At COP27 the rich countries must deliver robust action to scale up grant-based climate finance to the developing world.

Lastly, decisive steps must be taken to use national, not international financing mechanisms and structures for channeling finance. The International Institute of Environment and Development (IIED) designed a climate finance delivery mechanism that bypasses international intermediaries. Here, money flows directly to local civil society, national and local governments, and/or the private sector.

Hivos joins hands with its partners and climate movements in demanding that concrete, gender-responsive targets are set to get climate funding into the hands of local actors, and new funding mechanisms are developed by and with climate-affected communities to make climate finance work for them.

To conclude…commitments are vital, but focus must shift

The COP Presidency, this year in the hands of Egypt, has called for significant progress on commitments and pledges, especially on the delivery of the annual USD 100 billion from developed countries to developing countries. Failure to keep to this commitment has often been a breaking point in climate negotiations and has damaged trust between countries.

Equally important, however, is shifting our focus from the volume of climate finance to its effectiveness. Only then will a world governed by climate justice be within reach.