Elena has worked for 65 of her 81 years. She moves swiftly, but calmly through the kitchen while preparing a picadillo*, making handmade tortillas and pouring coffee almost simultaneously. She explains she wants to have everything ready before her granddaughter Shi arrives. Another of her grandchildren walks through one of the kitchen’s many doors, and she kisses him goodbye on his forehead, like a blessing.

She tells me about her past as if referring to another life. She was born in Atenas, a small city in the Alajuela province in Costa Rica. She and her 11 brothers and sisters moved several times to different cities inside the country while growing up. Today she lives in Heredia, a city near San José, the capital city.

“When I told my dad I wanted to learn how to sew, he sent one of my brothers to take classes. Whenever my brother returned, I would ask him to explain what he had learned,” she says. “That is how I learned to sew at the age of 15. I made three pairs of pants and two dresses a day.”

Shi, her granddaughter, enters the house like a chatty, happy tornado, and Elena serves her a meal. Elena and Shi are a lot alike: they both speak energetically and look you in the eye without hesitation. Finishing each other’s sentences, they laugh and weave warm, never-ending conversations.

While we’re eating, out come the family albums as they remember birthdays, Christmas and lunch gatherings. “Tita Nena, you made this dress I’m wearing in this photo, right?” Shi asks. Elena’s answer every single time is “yes”.

The threads that unite them

Shi and her grandmother have always been good friends. A cord that seems to transcend the physical realm has connected them both. “When she was about to be born and my daughter was in labor, they came to pick me up first before heading to the hospital,” says Elena. “Oh, that’s because I’m her favorite granddaughter,” replies Shi with a loud laugh.

Shi Alarcon’s path as an LGBTI activist is well known in Costa Rica. In 2007 she was a part of the Beso Diverso (Diverse Kiss) initiative. In 2009, she trained the directors of the Ministry of Public Education on the first non-discrimination protocol.

In 2012 she co-organized the “Invisibles” march, the first major diverse demonstration in Costa Rica, with over five thousand participants. “This protest brought together many political movements,” Shi says. After this, she became a part of the Frente por los Derechos Igualitarios (Equal Rights Front), an organization that was once a Hivos partner. 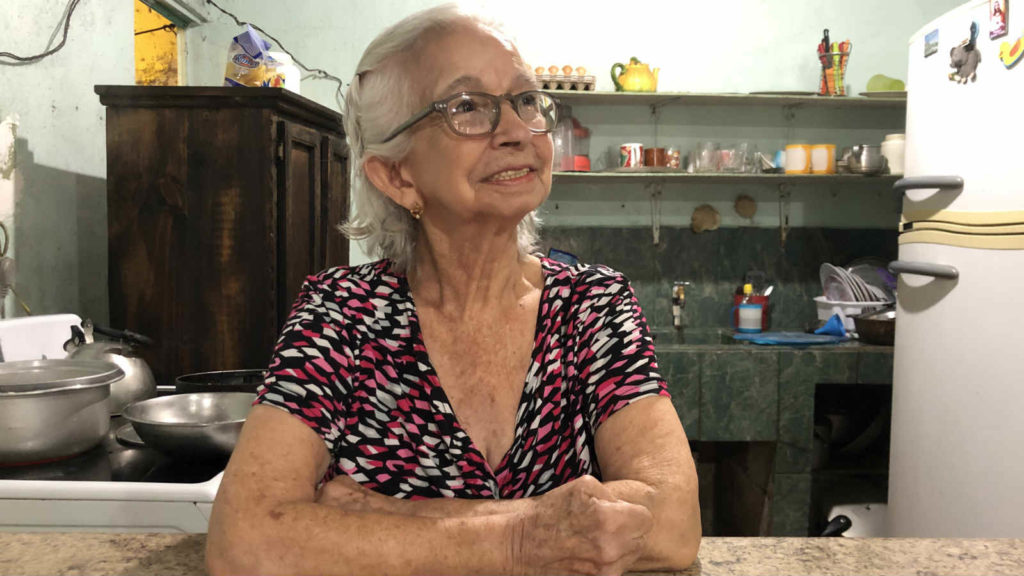 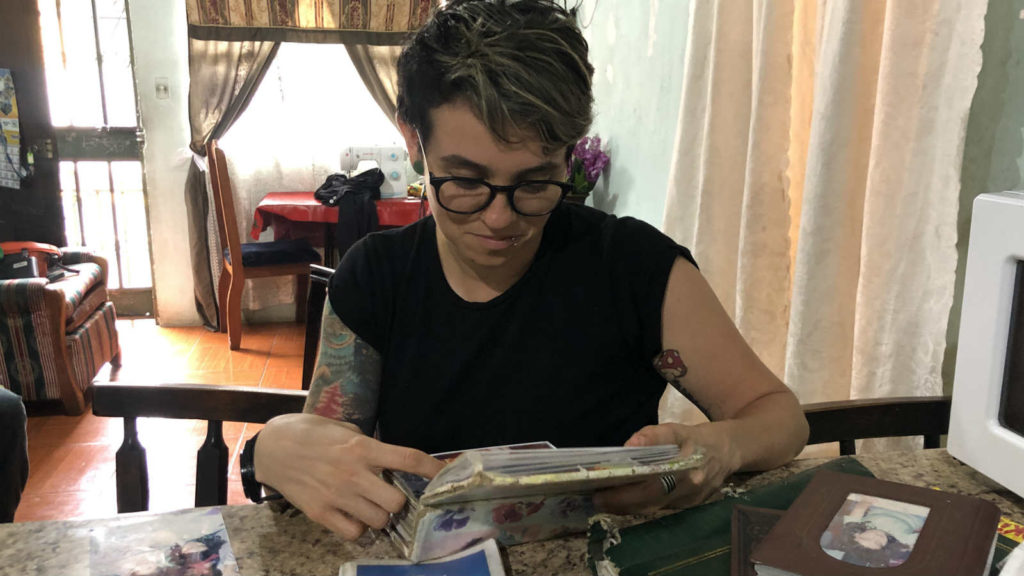 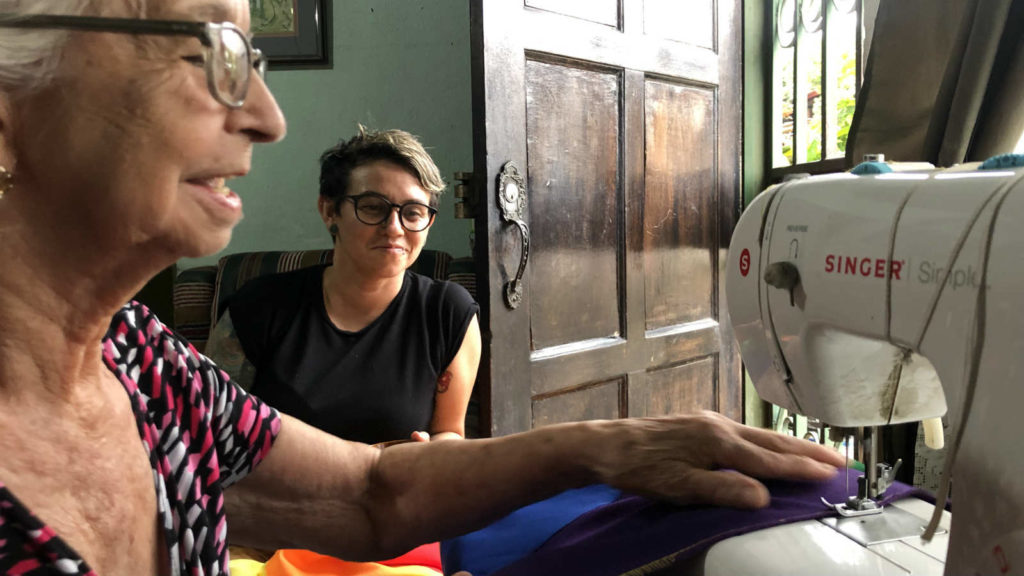 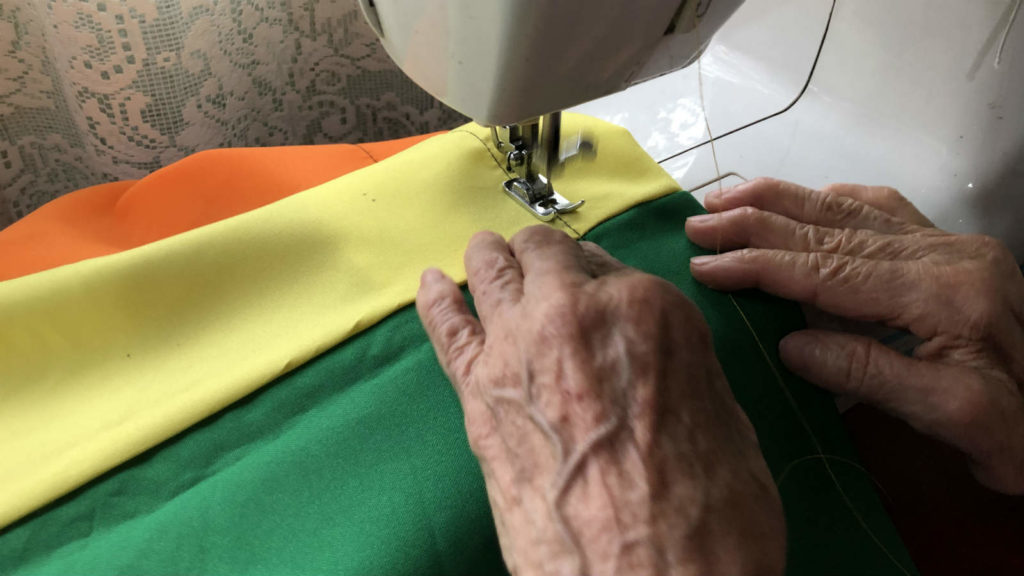 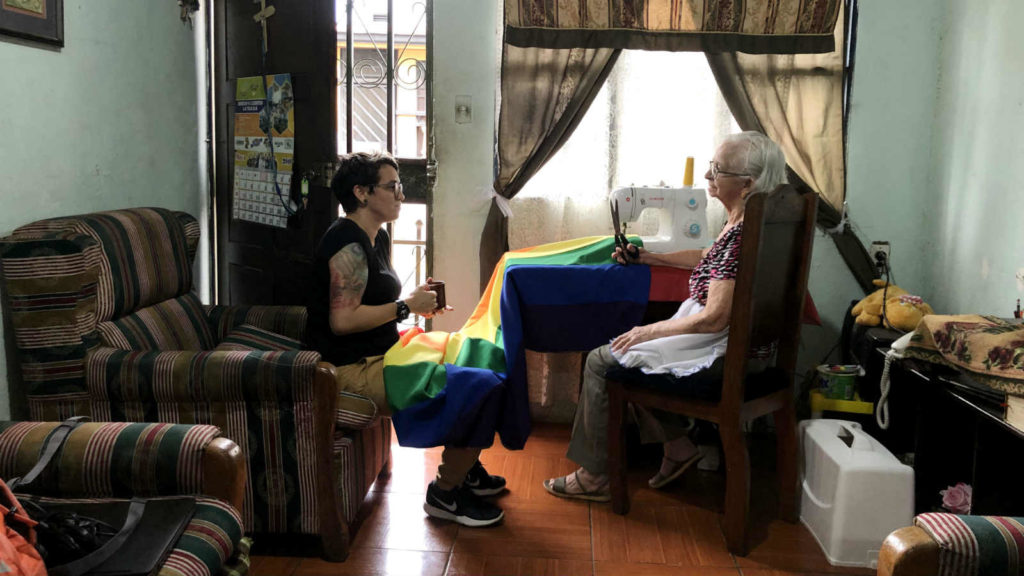 The grandma of the flags

“On May 16, 2014, Ana Helena Chacón (Costa Rica’s former vice-president) called me and told me she wanted to set up LGBTI flags in the Presidential Palace,” Shi recalls. “I told her that my grandmother was a seamstress and she could make them. Tita worked all night and the next day she had 12 flags ready for all the ministries”.

Shi explains that from that year on, Elena started making flags for every LGBTI Pride Day. People started ordering flags, and when they went to pick them up, Elena would welcome them with a meal and a chat. Last year, unfortunately, she had a heart attack and had to rest instead of working like every year.

Recovering the concept of family

“For me, true revolution will only be possible when we start talking about love,” says Shi. “What conservative groups call family is not family. Your family doesn’t discriminate against you, doesn’t exclude you. This is family.” (She points to her grandmother).

Shi tells me about her most recent project, Casa Rara, which she launched with the purpose of not leaving anyone behind. It’s a shelter for young LGBTI people. She dreams of expanding the project throughout the country and including diverse elderly people.

“How could I discriminate against my own blood?” asks Elena. She hugs her granddaughter tightly. Shi opens her eyes wide and, for a few minutes, seems to be five years old again. Elena continues to talk proudly about Shi’s academic achievements, adding that not everyone attains all the goals that Shi has in such a short time. They both fall silent and smile, without looking at each other.