Five years after the adoption of the Sustainable Development Goals (SDGs), the Nepalese government is well on its way to putting policies in place to achieve at least one of them. SDG7: access to affordable, reliable, sustainable and modern energy for all.

We are encouraged by the national government’s serious desire to close the energy access gap. Even more so because this is the result of concerted efforts by many of our partners. For example, Centre for Rural Technology Nepal (CRT/N), Hivos’ partner in the Green and Inclusive Energy Program, played a crucial role in this endeavor. They are making sure policies implemented are inclusive and respond to communities’ real needs and interests.

In June 2017, CRT/N established an informal forum called “CSO Energy Forum” with six other civil society organizations. The idea was to speak with a louder voice to the government in advocating for the right energy policies. Engaging civil society in implementing these policies is also high on their agenda.

From national to local

CRT/N carries out activities on several levels. One of their successes was involving municipalities in carrying out energy plans. This is particularly important because local governments are mandated to execute renewable energy programs. And energy access solutions need to be localized no matter what. Every region has different challenges and opportunities, e.g. electrifying households using hydro power in some places and biogas in others.

When CRT/N started talks with municipalities, they weren’t convinced of the importance of focusing on energy access as a development priority. So CRT/N provided training to sensitize them about the many benefits of energy access. This soon resulted in allocated budgets and work plans for energy access in nine municipalities, largely for domestic clean cooking systems.

Meanwhile, CRT/N’s experience also showed that the uptake of new energy solutions by the community, including clean cooking technologies, is equally important. So CRT/N worked with schools and developed a curriculum about energy access and renewable energy. Through school children, they educated parents and the whole community, encouraging them to change their habits. The focus was on the important role of women, switching to clean cookstoves and converting waste into energy through biogas technology.

Their work with schools was formalized in September 2016, when the Education Resource Centre in Gotikhel, South Lalitpur, Nepal, developed a curriculum on gender and energy for grades 1-5. In May 2019, the chairperson of Mahankal Municipality inaugurated the curriculum, and since then 28 schools in the municipality have been teaching the subject.

CRT/N then moved on to training female community health workers to promote clean cookstoves. With the Indoor Air Pollution and Health Forum Nepal (IAPHF-Nepal), CRT/N convinced the Ministry of Health and Population Nepal in October 2017 to include “clean energy, indoor air pollution (IAP) and health” in their training curricula for Female Community Health Volunteers (FCHVs). This recognized the important role of these women in raising awareness about the link between clean cooking and maternal health.

The women health workers have been very successful in creating awareness amongst families. Thanks to them, clean cookstoves have been promoted in 16 municipalities across 5 districts.

Role of the media

Our partners also approached the media to spread the word about the harmful effects of cooking with coal or on open fires. Hivos’ media partner in Nepal, Nepal Forum of Environmental Journalists (NEFEJ), published several articles and broadcast radio and television shows on this, as well as clean cooking solutions and the general benefits of energy access using renewable sources.

Furthermore, CRT/N and NEFEJ offered training and fellowships to sensitize media houses to include renewable energy in their regular reporting cycle. This led to, amongst other results, the launch of a new platform “Harit Tahata Samabeshi Urja” [Green and Inclusive Energy]. This is now a hub for journalists and experts to share experiences, opinions and articles on clean energy with a gender and social lens.

The multipronged approach has been a real shot in the arm for Nepal’s energy access goals. Currently Nepal has a staggering electricity access rate of 95.5 percent, according to the World Bank’s Energy Progress Report 2019. Only 1.3 million out of 29 million Nepalese remain to be connected to an electricity supply. Something officials say will be achieved in the next three years, well ahead of the 2030 target set by Sustainable Development Goal 7.

With the push from the CRT/N-led consortium and the Energy CSO community, the government’s Ministry of Energy, Water Resources and Irrigation has published an Energy White Paper that calls 2075 to 2085 the “Energy Decade” to further speed up this development.

However, over 75 percent of the population still uses firewood or other polluting and harmful fuels for cooking. This exposes 23 million people to household air pollution and causes some 21,000 deaths a year. The government has also made ambitious plans in this area, but it now comes down to implementation, something CRT/N will keep monitoring and influencing.

These partners and activities in Nepal receive support from the Hivos Green and Inclusive Energy program. We want to see the world switch to green and inclusive energy systems that provide universal access through decentralized renewable energy. In 2016, Hivos, ENERGIA, IIED and national civil society organizations (CSOs) partnered with the Dutch Ministry of Foreign Affairs in a five-year advocacy program to influence energy policies at all levels. It is running in Indonesia, Nepal, Kenya, Tanzania, Zimbabwe, Malawi, Nicaragua and Guatemala.

The program’s approach is fully laid out in: A Lobby and Advocacy Approach to Energy Access. 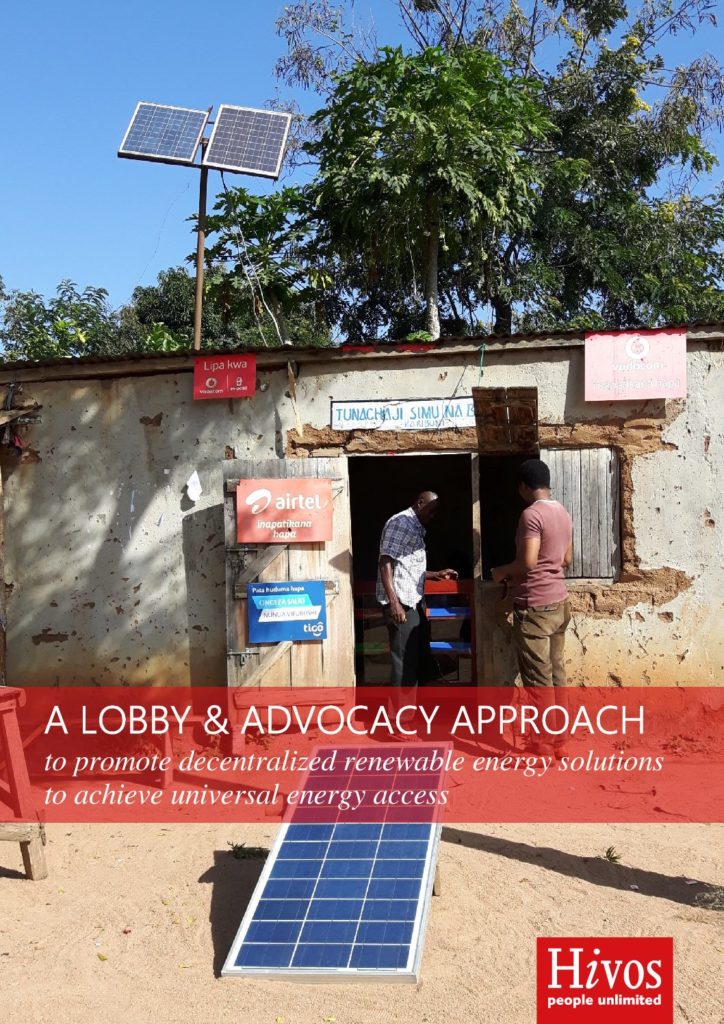