Hivos is gravely concerned by reports of public contracting and procurement anomalies reported to be occurring within the Nairobi City County Government. At the heart of the reported issues lie lack of transparency and public accountability in the use of public funds for the procurement of public goods and services.  Media reports indicate that these anomalies are dominated by issues of power and control over public funds, conflict of interest, flouted oversight requirements, and availability of procurement related data. 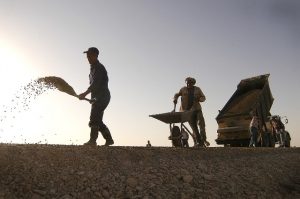 Example of a road construction on course

It has been reported that the Nairobi City County government has awarded a “lucrative” garbage collection tender to a private company known to be the brainchild of the current Nairobi Governor despite the glaring illegality arising from the known conflict of interest.

Additionally, the Nairobi City County has continued to engage Jambo Pay to provide revenue collection services despite the Auditor General’s findings faulting the tendering process that awarded the company the tender despite not being the lowest bidders.  Reportedly, attempts to cancel this tender have been met with unsubstantiated and questionable refusal at the highest level of office which substantiates allegations of political patronage. This is in spite of the Nairobi County Manifesto 100 Days commitment to “Revoke irregular and illegal contracts: replace all irregularly and illegally obtained contracts, including Web-Tribe’s extortionist payment system, JamboPay.” Other irregularities cited by the Auditor General’s Report (year ended June 2015) on Nairobi County include JamboPay’s inordinate delay in the remittance of funds as well as, alarmingly limited access of the County Government itself to data generated on public funds managed by this company. The report further cites that any manipulation of data under the current Jambo-Pay system would be unknown to the Nairobi City County Government.

Lastly, on oversight and accountability for public funds, the issue of overdue payments to contractors and others is reported to be under heavy contestation with a push for payments to be made without an audit despite the Auditor General’s recommendations to ensure the same undermining commitments made in the Nairobi County Manifesto.

Given how fundamental public contracting is for the provision of goods and services in impacting the lives of city residents, it is imperative that public funds be used more honestly, fairly and sensibly by the Nairobi City County Government in compliance with the existing laws and guidelines governing public finance, public procurement, public participation and conduct of public officers. Yet, Nairobi City residents are witnessing continued political patronage, lack of proper controls wastefulness, mismanagement, inefficiency, and blatant corruption. With these stark realities, it is clear that there is a blatant disregard for the ownership, needs and vulnerabilities of Nairobi city residents over their self serving actions.

The current contracts that have attracted the ongoing controversy are subject to the same limited disclosure requirements as are most public procurement contracts in Kenya. Some procurement information generated by public agencies is contained on a portal under the infamous Integrated Financial Management Information System (IFMIS). However, this portal does not capture data arising from the entire procurement cycle. Rather it contains information on the tender, successful bidder, adverts and notification, signing and completion, as well as the number of bids. Other data such as the needs assessment, procurement plan, reasons for award, bid evaluation reports, unsuccessful bidders, and details of owners of the bidding companies, and monitoring /oversight performance and issues related reports (of the contract is not available on the portal.

As cited by the Auditor General’s report, adequate and accessible data on public spending is critical for decision makers and public accountability. This data must also, critically, be made available to the public on whose behalf expenditures are incurred.

Currently, there are very limited opportunities for the Nairobi City residents and civil society to participate in the planning, awarding and monitoring of public procurement contracts entered into by the Nairobi City County.  While there is a requirement for citizen participation as a key performance indicator of public and state owned entities in Kenya, many have failed to develop adequate guidelines to facilitate the same. The public participation that does occur has been widely noted to be ineffective and largely tokenistic in nature.

Nairobi City County should take this opportunity now to improve the efficiency of its procurement system to guarantee better value for money, and support a more equitable and competitive business environment. This can be done by even small improvements in data collection, transparency and accountability in the public contracting cycle. Improvements in these areas will in turn propel efficient returns to taxpayers, improve management and curb corruption.

Effective and open data collection in public contracting in comparable local governments to Nairobi City County Government has benefited from data tools developed for this purpose. The Open Contracting Data Standard (OCDS) is a leading procurement data standard that defines a common data model to collect and disclose procurement data at all stages of the public contracting cycle. It allows for analysis of contracting data by procuring agencies, oversight institutions and an overall wide range of users. A free helpdesk service is also available to support implementation and use of OCDS. This is a tool that would greatly benefit the procuring operations of the Nairobi City County Government and assist in addressing the current issues being reported as a result of inconsistent, corrupt, illegal and opaque practices. These issues are greatly affecting effective and quality delivery of critical goods and services to Kenyans.

The Nairobi City County should improve their public consultation and involvement of the public at appropriate points in the planning, awarding and monitoring of public contracts. These engagements should be meaningful, and should also critically include incorporating public feedback to amendments to public procurement and any public contracting laws, policies and practices. Additionally, this feedback should result in timely and appropriate redress by the relevant government agencies to ensure real and sustained fixes on the ground.