Hivos > Uncategorized > News and Views > Stand Up with the Teacher Campaign, when community organizing succeeds

Stand Up with the Teacher Campaign, when community organizing succeeds

Women in Jordan mostly work in education, a vital yet highly underestimated sector.

In 2015, after a case study revealed that teaching contracts were not unified in the city of Irbid – home to the 2nd highest percentage of women in the Kingdom – Ahel decided to launch the Stand Up with the Teacher Campaign in order to call for the unification of contracts.

From the start, the Campaign was based on community organizing, which relies on building people power and not merely achieving change for the sake of change, in order to become a pillar for further reform at a later stage. This concept can be better understood if we look at the meaning of Ahel in Arabic, which means family; and in the Quran, which means ‘most deserving’ and ‘most capable’. This name was not randomly chosen. In fact, it emerged right from the core of Ahel’s work methodology based on empowering the most concerned population as it is the most deserving and most capable of carrying the struggle itself, as opposed to delegating it to an external entity. Nisreen Haj Ahmad – Director of Ahel – stressed on the fact that campaigns and NGOs “should not act as the voice of the silent people, but rather empower them to speak for themselves.” 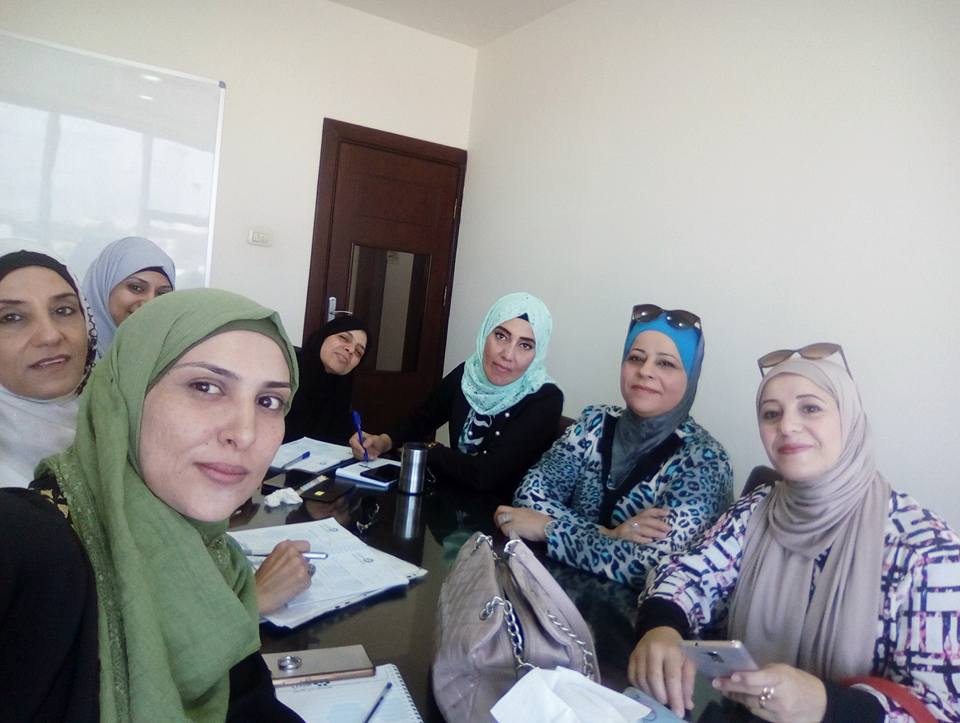 Stemming from needs such as unifying contracts and transferring salaries to the bank, the Campaign has now grown and is present in the cities of Irbid, Zarqa, Amman and soon Al-Salt, which together represent the biggest population density in Jordan. Each city’s team is composed of a maximum of 10 women. The necessity to organize teachers – who often fear getting fired on account of such community organizing activities – became a priority. “We rely on storytelling in order to recruit teachers,” says Haj Ahmad. This happens through three different channels: Teachers speak face to face to one another about the issues they face, they communicate on the Campaign’s Facebook page or are called on the phone by members using the data we have gathered. “Storytelling is crucial because a teacher shares her own personal experience with her peers. It’s different than listening to her talk about some story she heard about someone.” Following this step, a Teachers’ Training is organized, in which the participants learn about their rights and how to claim them. At this stage, individuals interested in taking part of the Campaign will stay in touch.

From this point on, the Campaign’s tactic is to enable the biggest number of teachers to know their rights. In order to do this, one-on-one phone calls as well as content shared on social media are heavily relied on. In addition, legal workshops are organized during the year for the same purpose. Also, popular educational circles are held at teachers’ homes, where participants can share their stories. The goal is to create consciousness, awareness and knowledge in order to be able to act.

To date, the Campaign has worked hard to ensure that teachers demand that schools use the unified contract and not another contract that would negate the rights they secured. Moreover, school licensing from this year on will be based on their transfer of salaries to the teachers’ bank accounts, which ensures they get paid the amount agreed upon and not less. However, activists are faced by intimidation. For instance, “in May last year, teachers were requested to fill a form asking them whether they would be interested in working at the school the following year. There was also a box in which they had to say whether they belonged or not to the Campaign,” explains Haj Ahmad. “Such questions will make them think twice before joining the Campaign,” she adds. In addition, since most activities and workshops take place on Saturdays, some schools force their employees to work on that day to prevent them from attending them.

Ahel’s partner Hivos has supported the Campaign because it believes in its importance in “creating confident women leaders in education,” especially that it falls within the scope of its Women Empowered for Leadership (WE4L) program. The education sector being mostly female, in this understanding “it does not make any sense for men to control the Jordan Teachers’ Association. Where is women’s dignity?” questions the Hivos Country Representative. The pillar of the Campaign is storytelling, which enables it to easily reach the audience, allowing stories to be documented and used “to inspire others and encourage their involvement.” For the Representative, community organizing is a successful method in this Campaign because “it enables concerned people to organize themselves and send their demands directly to decision-makers.”

One of the Campaign’s founders, Najah, quit her work as a teacher in order to be able to dedicate her time to fight for the cause. Her ultimate goal is the establishment of “an official monitoring organization that also works on empowering teachers regarding their rights.” Najah believes that she “became a stronger woman after joining the Campaign and learnt about a number of things such as the labor law, group and individual negotiation, facilitation, empowering teachers and others.”

A more recent member, Hadeel, joined the Campaign after discovering that the school wasn’t paying her social security fees, and attending a workshop organized by Ahel around that topic. In her opinion, the Campaign is successful but she thinks that it would benefit from “more relations and networking with the Ministries of Labor and Education, as well as the Social Security Corporation”. After joining the Campaign, Hadeel became “an outspoken person and a good negotiator.”

To conclude, if women teachers had not organized themselves, shared their stories and developed their capacities through community organizing, the Stand Up with the Teacher Campaign would not have been successful. This is definitely an example to build upon. However, despite the achievements attained, there is still a long way to go for both teachers and other female employees in the Kingdom in order to erase the gender pay gap, increase the participation of women in the workforce and facilitate the access of mothers of young children to the job market.