On the Road to a Better Procurement System in South Cotabato

The local government of South Cotabato, a province in the south of the Philippines, only completed 4.1 per cent of the development projects – most of them related to infrastructure – under the Local Development Fund in 2017.

“Once a contract was awarded by one agency, you would have to deal with another agency during project implementation, and then another to get paid, which would often be delayed,” says Zyra Fastidio from the European Chamber of Commerce in the Philippines (ECCP). It was also unappealing for new bidders to enter into business with the government because of low ceiling prices for bids and having to register into a portal before seeing announcements for opportunities.

To improve this relationship and to promote good governance, the ECCP set up the Integrity Circle platform, a nation-wide initiative that brings together local government, civil society, and business representatives. They discuss ways to improve governance and integrity in government services through what they call Integrity Mechanisms.

To ensure citizen participation, citizens validate the Mechanisms through a series of dialogues with all sectors and at all levels. When South Cotabato joined the Open Government Partnership Local Program, the ECCP saw an opportunity to use the dialogues to also tackle open government issues in South Cotabato and build its OGP 2018-2020 action plan.

Both the business sector and the village representatives pointed to the problems concerning procurement planning and implementation as a top priority to tackle. The ECCP partnered with Hivos to offer open contracting as a possible solution and make data and documents from the entire contracting process available, leading to more efficiency and ease of business. 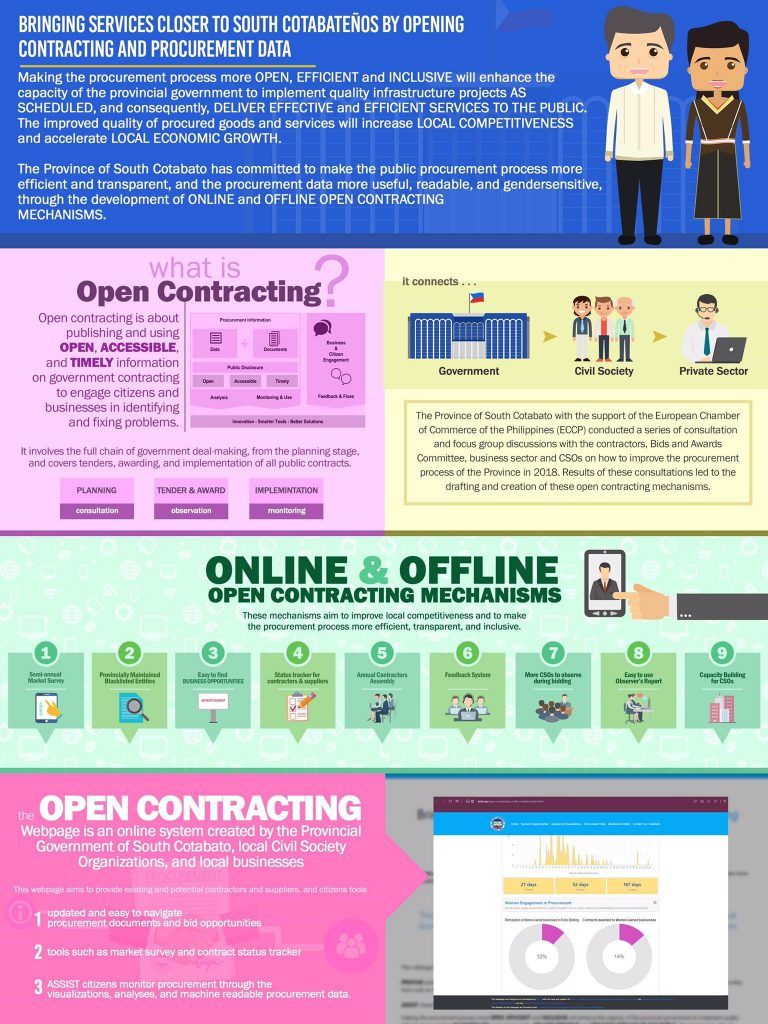 The dialogues served as a trust-building exercise between all parties where it was possible to be critical of the idea of open contracting and to ask any questions, Vivien Suerte-Cortez from Hivos explains. “We explained how opening up about procurement would not only benefit the government but also the business sector and the intended beneficiaries of government projects.”

“Making the procurement process more open and efficient will improve ease of doing business in South Cotabato, which in turn will attract more bidders to the bidding process,” says Fastidio.

South Cotabato recently unveiled its online and offline mechanism as another key milestone in the action plan. Much of the success of implementing this open contracting commitment is due in part to the use and institutionalization of the Integrity Circle, according to Suerte-Cortez. “Government members sitting in the Circle are not only elected officials, but are coming from all layers from bureaucracy. This makes for easier implementation of issues that are seen as risky, because the Integrity Circle will survive dynamic political situations.”

In the future, Fastidio aims to use the experiences of South Cotabato as an example to replicate in other regions. For now, she and the ECCP will keep working with the members of the Integrity Circle to implement the South Cotabato OGP action plan and make it more attractive for businesses to invest in the province.

Banner Image: The business and CSO representatives together with ECCP during the Integrity Week in September 2018 where South Cotabato’s OGP Commitments, one of which is Open Contracting, were launched in the event. Photo Credit: Hivos.

This post was previously published on the website of the Open Government Partnership. Original entry found here.