The Linking and Learning Conference, which took place this year in the Jordanian capital Amman, gathered women activists as well as Hivos partners and beneficiaries from Southern Africa – Malawi, Zambia and Zimbabwe – and the Middle East, Lebanon and Jordan.

During the Context Analysis session, speakers agreed that the term ‘women empowerment’ should be replaced by ‘women’s power’ because females have power and the duty of civil society organizations is to assist them in using it and actively participate in the public life, whereas the former terminology implies that they need to be given power in the first place and does not properly reflect reality.

For Kubashini Rama from Genderlinks in Southern Africa, countries members of the Southern African Development Community (SADC) have made achievements in terms of gender equity when it comes to gender sensitive legislation and policies. Furthermore, women have achieved a good level of representation in the political life. As for laws, a number of them were passed in order to protect women from gender based violence and prevent human trafficking.

Nonetheless, there are real challenges when it comes to implementing what has been signed on paper. For instance, the Southern African region is one of the countries that has the highest rates of women who suffer from gender based violence. Furthermore, females are not decision-makers when it comes to their own bodies and abortion; even in case pregnancy resulted from rape. Additionally, national politics often ignore the needs of women despite their increased political participation.

In parallel, for Dr Salma Nims, Secretary General of the Jordanian Commission for Women, the environment in which females live should make them feel safe in order to encourage them to get involved in the decision-making process and make change. Therefore, this is what needs to be addressed first.

Furthermore, despite being close on the geographical level, Lebanon and Jordan are different when it comes to the history of women’s activism and the freedom they have to play their roles. In Jordan, the women’s quota is applied during elections whereas this is not the case for Lebanon, despite attempts to adopt it. Nonetheless, the quota has not changed the impact women have in Jordanian politics and this brings us back to the social structure and its view of women. 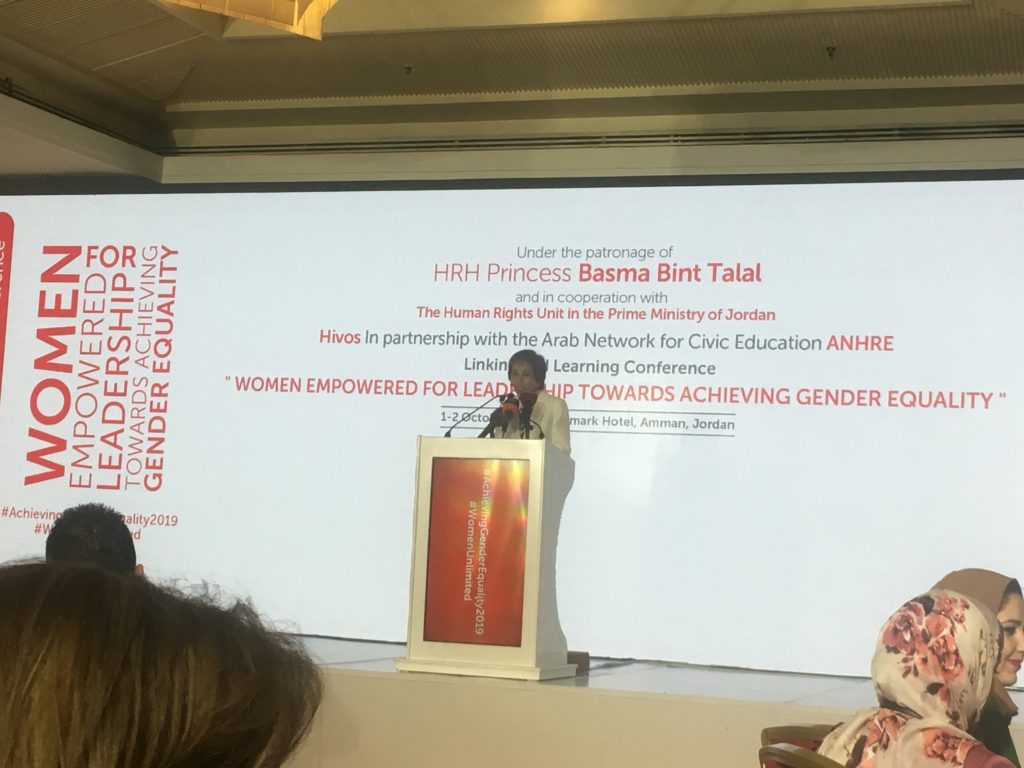 During the context analysis of women’s reality in both regions, which is necessary for planning interventions, many similarities were underlined in particular when it comes to challenges faced by females. These include child marriage, gender based violence, access to education, gender pay gap and access to leadership positions. This is what prompted participants to suggest the establishment of an international women’s movement that would enable females all over the globe to meet, share experiences and fight together. By doing so, females will build on each other’s experiences rather than start from scratch over and over again.

Attendees and speakers agreed that the local communities’ needs should be taken into consideration, and women should be encouraged to be part of the change. Equally important, gender equality should not be presented as a foreign agenda as this would create more resistance towards change. As well, the involvement of respective governments, in addition to the engagement of traditional leaders, is important as there should be a political and social will to support and promote gender equity. Finally, reforming curriculums and education should be at the core of any change strategy because it all starts by changing the mindset of people.