Hivos and ALEP are proud to announce that The Global Fund to Fight AIDS, Tuberculosis, and Malaria has approved a new US$ 10.5 million program that supports the sustainability of services for key HIV populations in Latin America.

Hivos was selected by Alianza Liderazgo en Positivo (Positive Leadership Alliance) as the Principal Recipient for this program, which was approved in response to a proposal submitted in 2018 by a consortium* of regional organizations representing key populations (KP) in Latin America and the Caribbean. These populations include people with HIV, sex workers, trans people, men who have sex with other men, and drug users.

However, there are still 170,000 people living with HIV who do not know their status and do not have access to proper sexual and reproductive health services, including HIV prevention and treatment. Hivos, the Positive Leadership Alliance, and several key populations and their organizations, will work in 11 countries throughout Latin America towards increasing domestic resources to fund effective key population HIV programming. In addition, the coalition will develop new funding strategies, especially aimed at KP-led organizations that provide services in places and to key populations who are unable to access health services due to stigma, discrimination and gender-based violence.

If we want to end HIV and AIDS by 2030 we need to increase international and domestic investments.

Sergio Montealegre, Hivos’ program development manager in Latin America, told us how it all started. “The project actually started in 2017, and at first it was just co-created with networks of people with HIV. Then in 2018 the Global Fund invited us to extend the proposal to other networks of key populations. This process is the beginning of joint efforts (respecting the particularities of each network) to make HIV services in the region sustainable.”

The proposed project interventions aim at improving living conditions and fulfilling the human rights of people living with HIV and other key populations. The project will provide access to comprehensive, differentiated and quality services and increase funding to support the sustainability of the regional response to HIV, thus contributing to Sustainable Development Goal 3.3 (end AIDS by 2030).

The sustainability of the HIV response in Latin America

There are various trends within Latin America regarding the HIV burden, HIV-related policies, and funding. Some are worrisome. For instance, while there are noticeable reductions in new HIV infections in El Salvador and Colombia, new HIV infections have increased in Costa Rica, Bolivia, and Brazil[1]. Some population groups continue to be disproportionately affected by HIV, particularly men who have sex with men, transgender women, sex workers, and people who use drugs.

While considerable progress has been made, the sustainability of this progress is at stake. If we want to end HIV and AIDS by 2030 we need to increase international and domestic investments, and strengthen key populations and their organizations to participate effectively in national HIV programs.

Since the early 1990s, Hivos has helped pave the way to justice for people living with and affected by HIV by positioning HIV as a human rights issue. We have worked with partners in more than 30 countries to ensure their voices are heard, and their concerns, needs and demands are met. 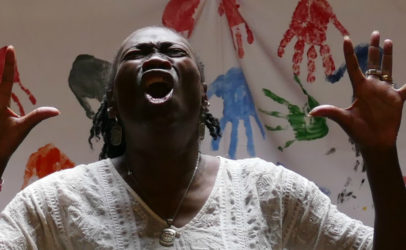 Strengthening women with HIV through theater