Voices from Latin America were heard from November 11 to 14 at the Latin American Energy Organization’s (OLADE) fourth edition of Energy Week, in Lima, Peru. Women leaders spoke about what it’s like to live without access to energy, the challenges for women in the energy sector, and how they‘ve developed innovative solutions in their communities.

Energy Week 2019 brought together government, business and university representatives, international organizations, and students to discuss topics ranging from current energy policies and technological innovation, to renewable sources, efficiency, and access. The agenda also included sessions on the challenges facing the energy sector in Latin America and the Caribbean and the next steps we need to take.

Hivos was one of the seven main sponsors of the event. I’m happy to report that our workshop on day two, Access to Green and Inclusive Energy, was very well attended. Probably because the event’s sea of statistics and technical reports made people curious about how those without access to energy actually live. Or about those who have worked to bring energy to their homes and their communities. And what better way to do this than by having women leaders in the field tell their stories?

So our first workshop panel featured five women from different countries united by their experiences related to energy. They each told their stories and explained the challenges they still face to have affordable and quality energy in their communities.

Magdalena Vega, from Ostional in Guanacaste Costa Rica, was the first to speak. Although the situation in Costa Rica is not so bad, some years ago she was still part of the 0.4% that wasn’t yet connected to the network.

The arrival of energy to their community was a radical change. Moving from firewood and candles to a kitchen and light bulbs was a huge step. “Our community worked hard to bring electricity to our homes. Now we have better living and development conditions. Our tourism projects have greatly improved.”

Then it was the turn of Petrona Chávez, Reyna Chiquín and Nancy Velázquez, three leading Guatemalan women from different communities. They described what their lives were like before they had energy. Petrona said, “In the past we lived with many difficulties because we didn’t have electricity. We got up and went to bed very early to take advantage of the sunlight.” But once the Batzchocolá mini hydroelectric plant was built, the situation changed. Today, their community has schools, jobs and energy-based ventures. However, the effects of climate change are putting the sustainability of the electrification system at risk.

Developing women’s leadership in their communities hasn’t been easy. For Reyna, it was a challenge to travel more than three thousand kilometers to Lima to represent the 1,200 families in her village of Chicamán. However, her desire to share her experiences and continue learning from others made her accept the invitation to Energy Week. Reyna is also deeply motivated by the desire to one day bring electricity to her home and those of her neighbors.

We hope to achieve access to renewable energy, managed by our community to change our lives.
Reyna Chiquín – Chicamán, Guatemala

Nancy’s story is a little different. She lives in San Pablo de Tacaná, in Guatemala, a community in the north. They went from managing their own renewable energy project to producing energy from traditional fuels. But now they’re back on track, and are working to produce energy from renewable sources again.

We don’t want anything handed to us, we just need a first push to generate development and resources.
Nancy Velázquez – San Pablo Tacaná, Guatemala

The last to speak was Yusuni García from the Jaén community in Peru, where an improved cookstove project has recently been developed. Previously, without access to energy, they had to use firewood for cooking. This was having a very negative effect on their health, especially the women and children who are most exposed to indoor pollution. But the arrival of more efficient cookstoves has made quite a few changes, Yusuni said. “Given how easy and fast it is to use the new stoves, some men have begun to take on kitchen work, and this has allowed us women to spend more time on other things, like agriculture.”

In the second workshop panel, we heard the stories of women who have made their way into the energy sector as professionals. We heard from Debora Ley, Economic, Energy and Natural Resources Officer of ECLAC; Olga Otegui, National Director of Energy of Uruguay; and Irma Gutiérrez, gender specialist of the National Electric Transmission Company of Nicaragua (ENATREL). All three have lots of experience in the energy sector and agree that men’s resistance to working alongside women engineers has always been a barrier. 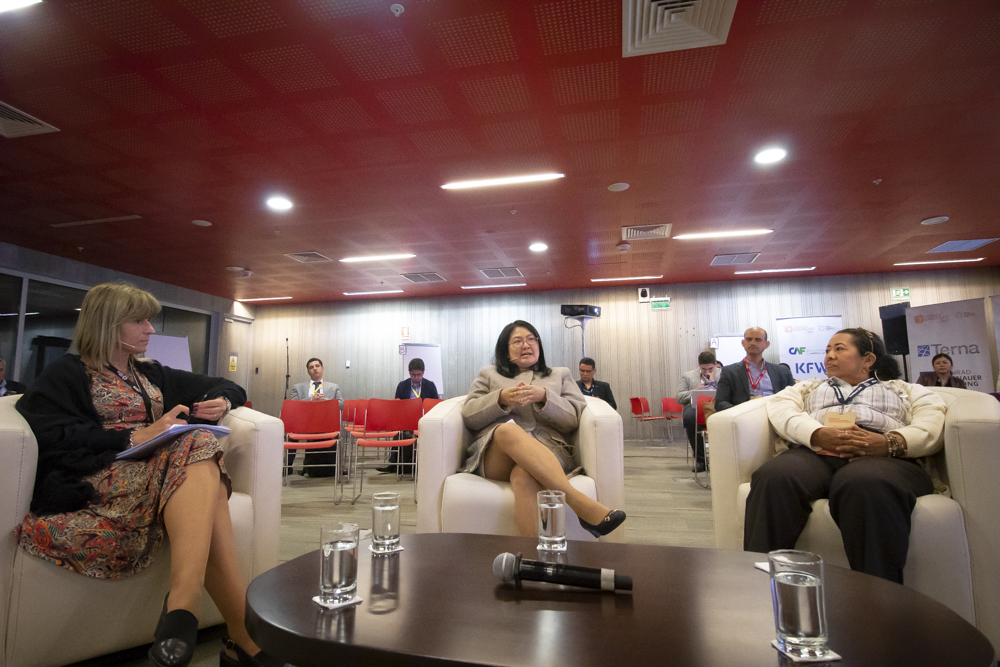 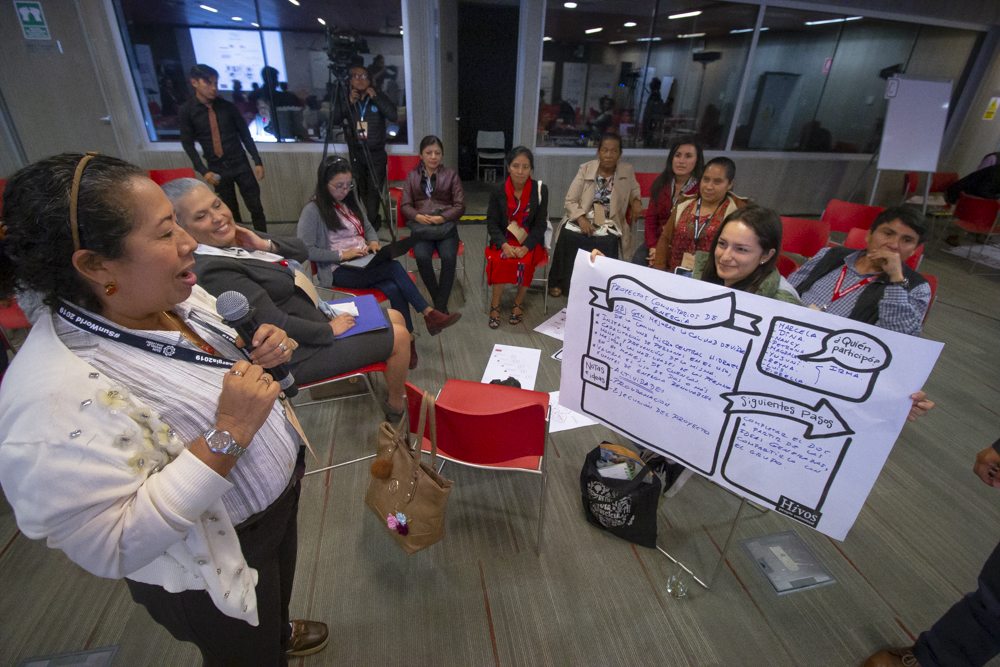 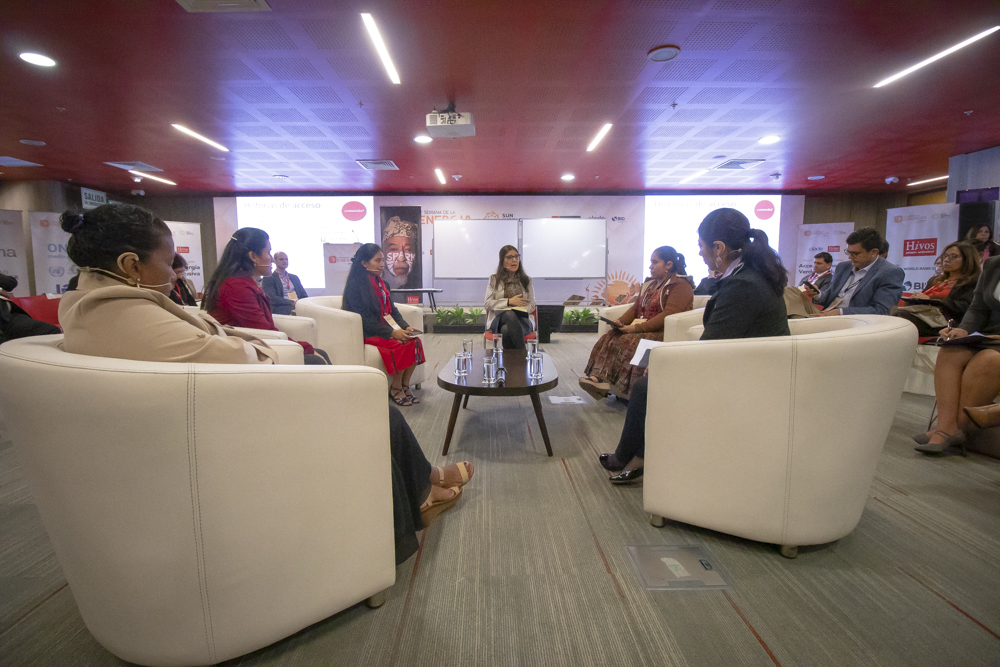 Olga describes it as a cultural issue that must be countered with education from childhood, “so that from an early age, girls learn to expand their possibilities and not fall into traditional gender roles.” She and Irma both said that opening more technical training spaces and promoting women and girl’s participation is essential, “because the legislation exists, but it is not given the necessary follow-up.”

Débora, from ECLAC, recounted her experience with the implementation of projects in communities. According to her, communities getting access to energy doesn’t necessarily solve all their problems because in many cases women don’t benefit from the improvement. “I’ve seen cases of communities where, because they have electric light, men gather in the streets late at night. This creates situations of harassment and insecurity for women, which forces them to stay in their homes when it gets dark.”

Both panels gave us a clearer view of how (lack of) access to energy affects women, and in some cases, gender relations. The women from Central and South America opened our eyes and made us think about what we can do to change some of their realities.

For those who couldn’t attend our Access to Green and Inclusive Energy workshop in Lima, we set up an interactive exhibition, Central America Unplugged, during Sun World 2019. Based on research by El Intercambio that bears the same name, it uses photographs and videos to tell the stories of communities in Guatemala, Honduras and El Salvador that have managed to live without energy or with limited access to it. 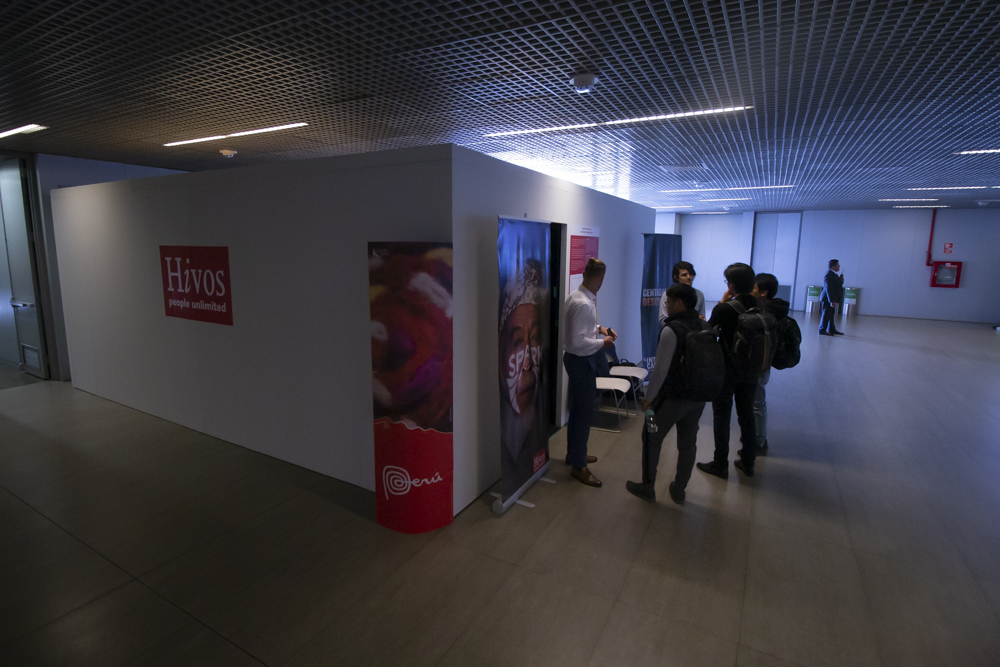 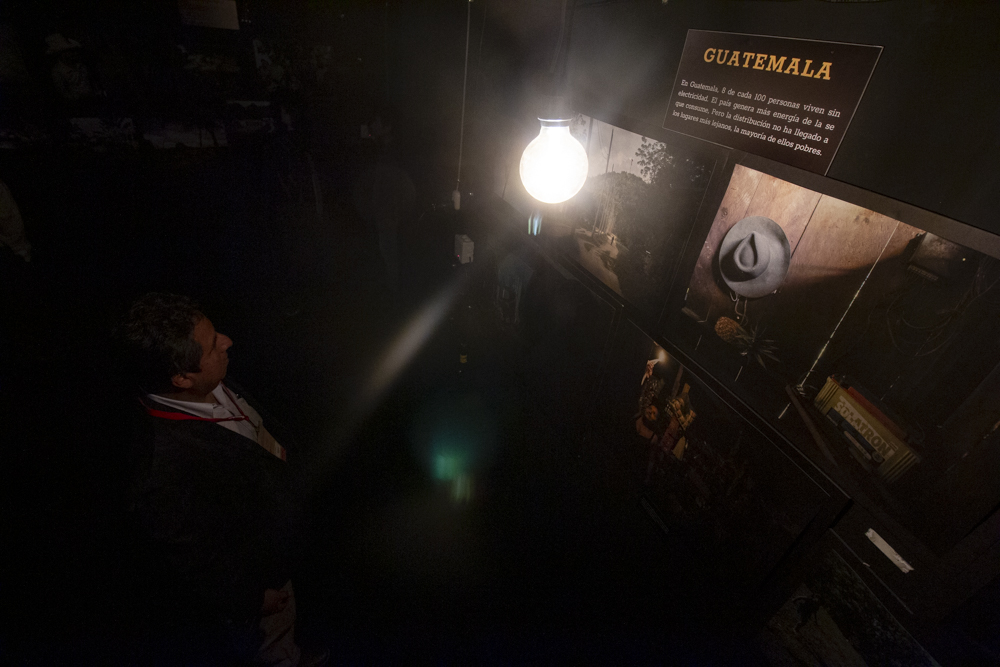 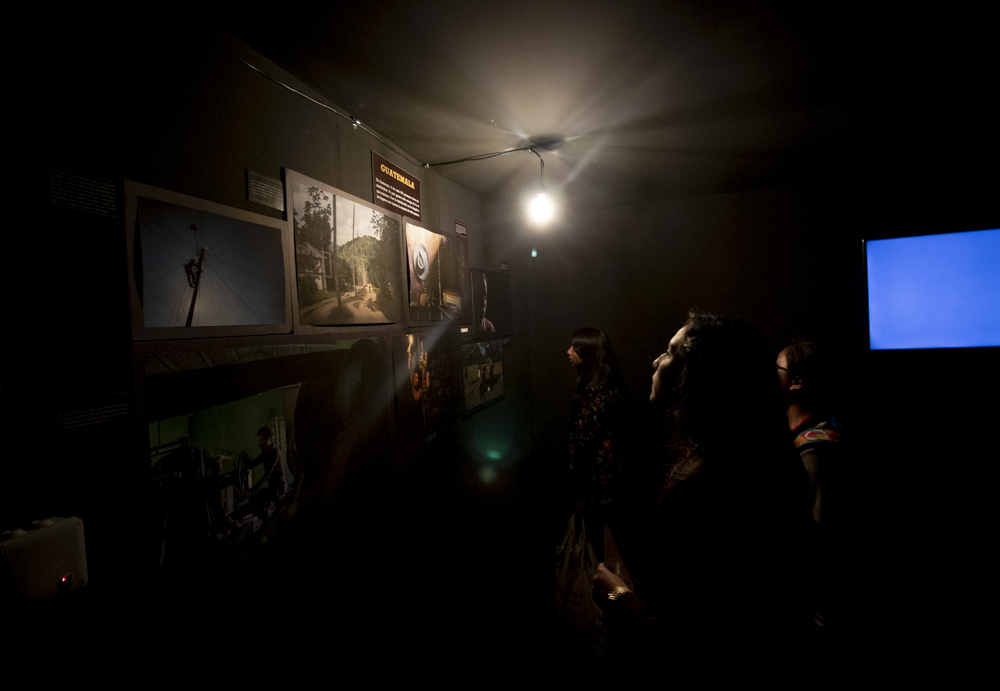 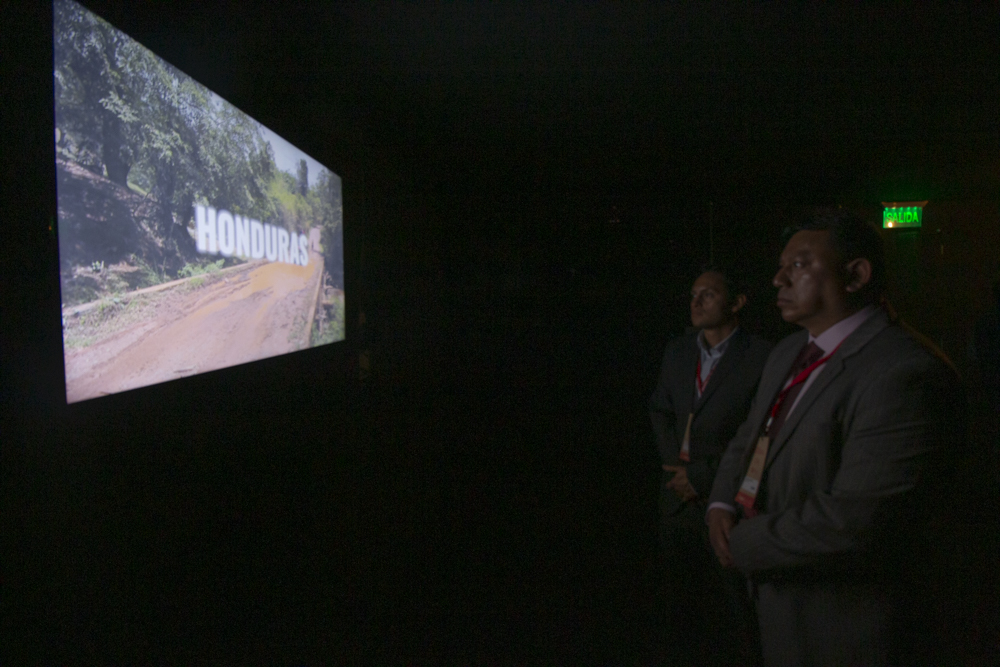 Those who attended, made the same decisions of the people portrayed: rationalize their resources to turn on lightbulbs and read stories of access to energy. Feelings of frustration and anxiety predominated, but mainly, attendees had the opportunity to put themselves in the shoes of those who make these decisions on a day-to-day basis.

Our workshop at Energy Week gave everyone the chance to learn, live and feel what communities, and mainly women, in South and Central America experience in terms of access to energy. Although individual realities are different, this type of workshop created a common space to forge alliances and generate ideas together. Even more important was the fact that people want to contribute from their experiences. Organizations like Hivos just need to provide the necessary stimulus to spark the change process that our planet and its people need.

Do you want to know more about our time at Energy Week? Check out this video: