Blog by Onai Mushava, freelance contributor at This is Africa. This article is written as part of a storytelling series commissioned in partnership with African Crossroads and was originally published on This is Africa.

News has never been greener, from corporate green-prints and multi-lateral alphabet soup to pop music and dystopian cinema, but ordinary people’s voices remain scarce in the ongoing mainstream buzz for climate sustainability. “If you are not at the table, you are probably on the menu,” is especially telling for ordinary Africans erased out of ecological decision-making by the consultative opacity of conscience capitalism. African Crossroads’ 2021 conference not only tapped voices of the young and the have-nots, but went further afield to amplify the voices of nature herself. The conference ended with an eight-bullet collective manifesto for Climate Justice in Africa that still remains open to new perspectives.

The question: “What does climate justice mean for Africans?” inspired the 2021 edition, with an urgent emphasis on amplifying traditionally underrepresented voices in inclusive climate action. Panels and features, from the earthy to the nerdy, included the Sound Atlas, a youth workshop and a hybrid residency titled “Hacking the Climate”, a Game Jam on Ecoexistence, music from high-concept rapper Yugen Blakrok, among others, the Hivos-curated Kiunga Collective, mixed-media displays and poetry interludes.

Notes from the Crossroads: What African leaders owe trees and wetlands

In a panel discussion on the inclusion of Indigenous communities and African youths in the fight for climate justice, there was the critical question of harnessing Indigenous knowledge for climate conservancy. Traditional beliefs were invested in ecological harmony but this panel and more showed that modern African leaders could not be further from their roots. “In Kenya, an MP said we should cut down trees because they make us feel cold at night,” host Memo Some pointed out.

Kenyan climate activist Wanjũhĩ Njoroge also on the panel, pointed out that when the Forest and Conservation Act of 2016 was passed in Kenya, the head of the committee was the same MP who had urged people to cut down trees for warmer nights. “You ask yourself how: Is this person going to pass policies that will protect the environment?”

“Register to vote and vote for people not because they are giving you a few shillings but because they will protect the environment, and put them to task,” Wanjũhĩ said, adding that young people must also protect the vote, run for public office and not despise fellow youngsters who contest elections as they are usually more invested in the future than their older counterparts.

At the end of the two-day conference, African Crossroads unveiled its Climate Justice manifesto in eight principles. The principles emerged through contributions from the network’s members during the year. Subsequently, participants at the gathering engaged in a voting exercise to refine this input. The manifesto is subject to revision as consultation goes on. These eight principles form the basis of finer action points further elaborated by Africa Crossroads:

As a collective community, African Crossroads envisions a better future and takes steps towards a shared vision that aims to “intentionally build synergies between individual creative practitioners, institutions, authorities, private business and communities that spread awareness, knowledge and practice of the changing relationship between humans, nature and technology”. 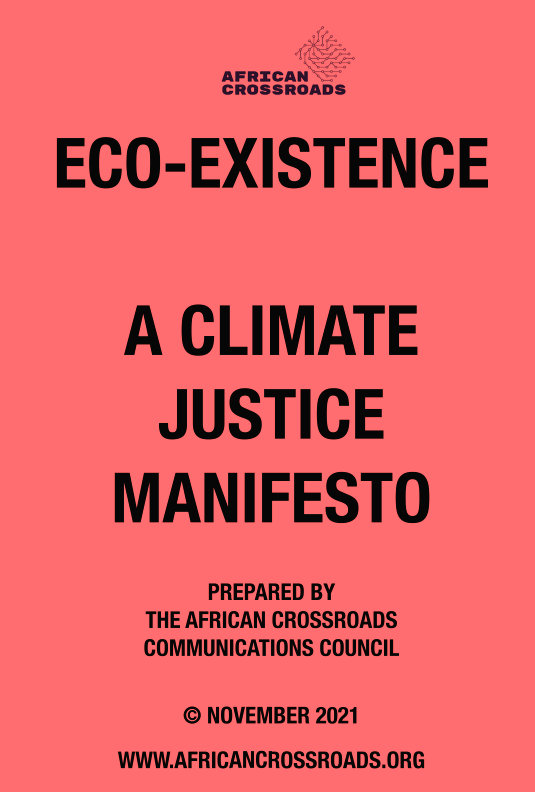 A rousing call to Climate Action

African Crossroads 2021 was a culturally fulfilling experience and a rousing call to climate action. The original sin of the Anthropocene, treating nature from the position of human entitlement, extraction and acquisition, was put on blast. Ordinary people took charge, in-between geeks with Pan-African flags on their faces, academics, artists and able hosts moderating the different sessions. This is only the beginning. The consultation on “Ecoexistence” continues as activities continue, open and accessible through the Africa Crossroads website.

This article is part of the series called: Symbiocene – Finding Coexistence: Earth, Water, Wind, Fire and Us, a collection commissioned in partnership with African Crossroads. You’ll find some other articles below.

The contents of the series are the sole responsibility of This Is Africa Trust, and cannot be regarded as reflecting the official position of Hivos.