Hivos International and Beyond Reform & Development (BRD) explored public perceptions of Lebanese women in leadership positions through a national representative survey of 847 female and male respondents in 2018. The research is available in both English and Arabic.

Using 50 questions that highlight perceptions of women who engage in politics and their environments, the quantitative survey addresses a need for the production of gendered data in the country by plotting the patterns in the challenges faced by women who engage in Lebanese politics.

The Hivos research also maps the characteristics of individuals who support or oppose female politicians by considering the differences in socioeconomic and demographic variables such as age, gender, region, education level, work status, and marital status, income, and being politically active. Respondents with higher income levels, who live in Beirut, who earned a university degree, and who were younger tended to hold less negative stereotypes about women and their ability to participate in the public sphere, as further mentioned in the survey’s accompanying info-graphic

Over 80% of the population agrees that women are underrepresented in Lebanese politics, according to the data collected under Hivos’ Women Empowered For Leadership (WE4L) program. However, the multiple variables studied in the survey show distinct differences in the perception of where and how they should be represented, their abilities to meet the responsibilities of a political career, and the challenges facing them.

The conducted research provides a basic building block for the discussion of these challenges by turning unstructured public perceptions of women into structured data. The survey acts as a necessary tool for civic organisations, public institutions, and political parties to construct clear and well-defined plans that increase the political participation of women.

Perception of Women In Politics: How And Where Should Women Be Represented?

A majority of the population believes that Lebanese women are underrepresented in the political scene, but disparities exist regarding their support for their equal representation in all three state branches.

Females also expressed more support than males for female leaders in political, judicial, and security sectors, with an average difference of almost 11%.

When asked about setting a quota for women in Parliament, not specifying a number of seats received the highest rate of support (34%) from all respondents, followed by setting a quota of 38 out of 128 seats (22%).

Individuals with higher incomes and more education were less supportive of a quota. They also considered gender irrelevant when asked to vote for an equally qualified candidate that’s either female or male, with 47% of women considering that gender did not matter and 64% of men considering the same. 44% of women would vote for the female candidate, while less than 10% of men would.

The separation of “women” issues from politics was also evident, with more than half of the respondents from the South indicating that only women should work on gender issues in political parties.

While older individuals, less education, and less income were associated with less support, levels of support also generally decreased when considering higher leadership positions. Over 90% of respondents would support a woman being a member of parliament, but less than 68% would support a female prime minister or a female political party leader.

Perceptions of Women In General: The Traits That Hold Them Back

Support or opposition of women in leadership positions could be associated with the general perception of women that emerged from the WE4L and BRD survey. One fifth of respondents held negative stereotypes about women that could impede their involvement in politics, with men being twice as likely on average to hold such stereotypes. 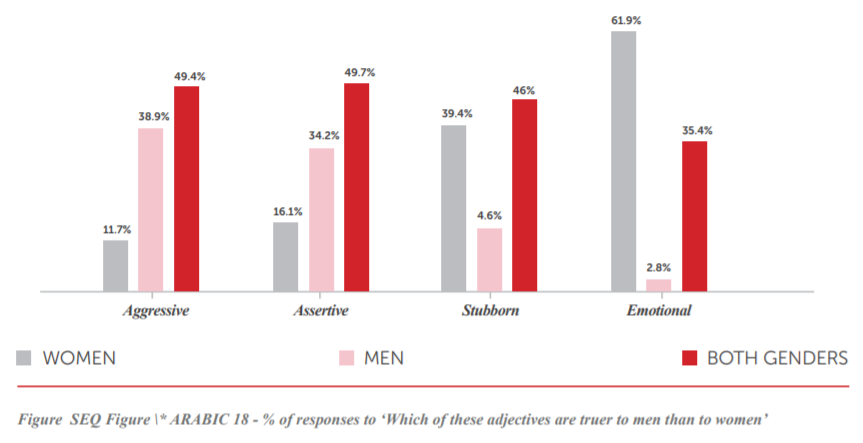 Male respondents generally considered women to give up more easily than men when faced with challenges, to be fearful and weak in the face of threats, submissive and easier to control, and more indecisive among other stereotypes. Those living in Beirut, who have a university-level education, who know women active in political parties, and who have a higher monthly salary tend to have more positive perceptions of women in politics.

The least percentage of respondents labelled women as aggressive (12%) and assertive (16%), but almost 50% of respondents considered the two traits to represent both women and men.

While a a large majority disagreed with the statements that male politicians are more trustworthy (96%) and more political savvy (64%), this arguably works against women.

“This does not necessarily work in women’s favor given politics is viewed as “corrupt” and “dirty” work which “does not fit in for the morally superior woman,” reads the Hivos survey.

When asked about the concerns of becoming more politically active, female and male respondents highlighted the decrease in their ability to spend time with their families. Older respondents, however, were significantly more concerned about losing their privacy.

The Hivos survey also asked respondents about their willingness to partake in electoral campaigns, from leading electoral campaigns to giving speeches. Results revealed that full-time mothers expressed the least desire to take on political positions.

The Hivos and BRD survey highlights significant differences in perceptions of females in the Lebanese political scene, aggregating essential data that can lead to structural changes in the ways groups tackle the obstacles hindering the participation of women in decision-making processes.